Located off of the north-east coast of Norfolk, the Haisborough, Hammond and Winterton SAC contains the protected features 'Sandbanks slightly covered by sea water all the time' and 'Reefs'. The site lies across the 12 nm territorial sea limit, and therefore advice for this MPA is jointly delivered with Natural England.

Note: Margins are included within the "Sandbanks which are slightly covered by sea water all the time" and "Annex I Reef: Sabellaria spinulosa reef” to account for uncertainty in feature extent on sandbanks that are known to be mobile. The margins can be viewed in the Annex I sandbank layer provided on JNCC's MPA mapper, however these margins are not displayed in Natural England's MAGIC interactive mapper.

The diagram below is a summary of the key milestones involved in the selection and designation of Haisborough, Hammond and Winterton SAC.  More detail can be found in the Relevant Documentation section below.

June 2009
Site formally recommended to the UK Government as a draft Special Area of Conservation (SAC).
November 2009 – February 2010
Formal public consultation. Site becomes a possible SAC.
August 2010
Submitted to the European Commission. The Habitats Regulations now formally apply to this MPA.
November 2011
Site is approved by the European Commission as a Site of Community Importance (SCI).
September 2017
Site is formally designated as a SAC by UK Government.

The documents referred to below and any other historical documents relating to Haisborough, Hammond and Winterton SAC were produced during the selection and designation process and therefore may be out of date.  This Site Information Centre is the most up-to-date source of information for this MPA, and will reflect any additional information gathered since these documents were produced. Information about the SAC site selection process is available on JNCC's SAC webpages.

The information for this site summary was adapted from documents listed in the Relevant Documentation section and incorporates any further information gathered since the documents were produced.

The Haisborough, Hammond and Winterton SAC lies off the north east coast of Norfolk, and contains a series of sandbanks which meet the Annex I habitat description for "Sandbanks slightly covered by sea water all the time". The central sandbank ridge in the site is composed of alternating ridge headland associated sandbanks. This ridge consists of the sinusoidal banks which have evolved over the last 5,000 years, originally associated with the coastal alignment at the time that the Holocene marine transgression occurred). The bank system consists of: Haisborough Sand, Haisborough Tail, Hammond Knoll, Winterton Ridge and Hearty Knoll. Hewett Ridge and Smiths Knoll form an older sequence of sandbank ridges located along the outer site boundary. In territorial waters are the Newarp Banks and North and Middle Cross Sands which lie on the south-west corner of the site. These banks are believed to be geologically recent, their genesis dating to around the 5th century AD. A margin of 500 m has been added around the edges of all sandbanks within the site to reflect current uncertainty in feature extent. As well as this margin an additional margin of 1,000 m has been added to the boundary of Middle and North Cross sandbank in the south-west of the site, to account for projected movement of the sandbank over a period of 10 years since bank delineation in 2010. While the areas inside these margins are not confirmed but potential feature, JNCC advises a precautionary approach to their management (i.e. treat them as if they were confirmed feature to ensure appropriate protection now and into the future).

The sandy sediments within the site are very mobile due to the strong tidal currents which characterise the area. Large-scale bank migration or movement appears to be slow, but within the sandbank system there is a level of sediment movement around, and also across, the banks. This is evidenced by megaripple and sandwave formations on the banks. Infaunal communities of the sandy bank tops are consequently of low biodiversity, characterised by mobile polychaetes and amphipods which are able to rapidly re-bury themselves into the dynamic sediment environments. Along the flanks of the banks, and towards the troughs between the banks the sediments tend to be slightly more stable with gravels exposed in areas. In these regions of the site infaunal and epifaunal communities are much more diverse. There are a number of areas where sediment movements are reduced and these areas support an abundance of attached bryozoans, hydroids and sea anemones. Other tube-building worms such as keel worms Pomatoceros sp. and sand mason worms Lanice conchilega are also found in these areas, along with bivalves and crustaceans.

Sabellaria spinulosa reefs are also a protected feature of the site and are located at Haisborough Tail, Haisborough Gat and between Winterton Ridge and Hewett Ridge. They arise from the surrounding coarse sandy seabed to heights of between 5 cm to 10 cm. The reefs are consolidated structures of sand tubes showing seafloor coverage of between 30% and 100% of the sediment. A margin of 500 m has also been applied to the point and line records of Sabellaria. Similarly, while the areas inside these margins are not confirmed but potential feature, JNCC advises a precautionary approach to their management (i.e. treat them as if they were confirmed feature to ensure appropriate protection now and into the future). Further detail on the evidence for this SAC can be found in the Evidence section.

Site depth range:  Depth at the site ranges from the top of the bank features that almost breach the sea surface down to 52 m below sea-level in the sandbank troughs.

Site boundary description: The site boundary is a simple polygon enclosing the minimum area necessary to ensure protection of the Annex I habitat features. Co-ordinate points have been positioned as close to the edge of the interest features as possible, rather than being located at the nearest whole degree or minute point. Where it is justified to protect the features of the site from the effects of mobile gear on the seabed at some distance from a vessel on the surface, a margin in proportion to the water depth may be added to the extent of the feature when defining the site boundary. The SAC contains Annex I sandbanks at depths of predominantly <25 m below chart datum. Therefore, a margin of 100 m was used around each sandbank feature except where a straight line between two points was the more sensible option to avoid an over-complicated boundary following the UK guidance on defining boundaries for marine SACs for Annex I habitat sites fully detached from the coast.

The full overview of the range of data used to support site identification, along with information on confidence in feature presence and extent is available in the Haisborough, Hammond and Winterton SAC Selection Assessment Document.

References for further supporting scientific literature consulted during the identification of this site can be found in the Selection Assessment Document found in the Relevant Documentation section. Please be aware that although these sources contain information in relation to this MPA, they do not necessarily represent the views of JNCC.

The formal advice reflects the most up-to-date evidence held by both Natural England and JNCC and must be taken into consideration when undertaking an assessment of the effects which a planned activity can have on the site’s integrity and when making decisions regarding management and consenting of marine activities in or near the site. For more information on JNCC’s approach to conservation advice please see the 'Conserving MPAs' webpage. Information can also be found from Natural England on the gov.uk website.

This site forms part of the networks of MPAs across the UK and contributes to international MPA networks such as that of the North-east Atlantic under OSPAR. As the UK is a contracting party to the OSPAR Commission, JNCC is committed to ensuring that the OSPAR MPA network is well-managed. The site straddles the 12 nm limit, therefore JNCC and Natural England have joint statutory responsibility to advise on the conservation of this site.

The sub-sections that follow provide an account of the progress of Haisborough, Hammond and Winterton SAC around each of the four stages in the MPA management cycle.

A baseline condition survey was undertaken in 2011 to identify the location, extent and condition of Annex I habitat features within Haisborough, Hammond and Winterton SAC and Inner Dowsing, Race Bank and North Ridge SAC. Further information is provided in the Evidence and Monitoring sections.

A site condition monitoring survey took place in 2016 to monitor and inform assessment of condition of the designated features. This was a collaborative survey of sandbank sites in the Southern North Sea. Further information will be made available in due course. 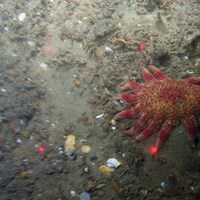 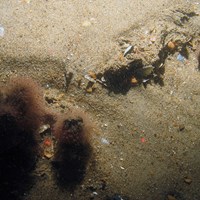 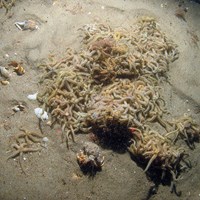 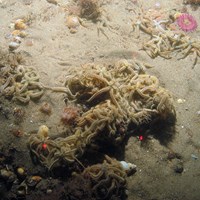 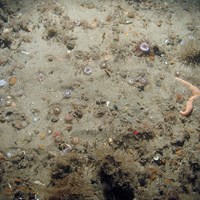 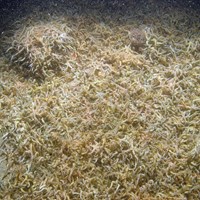 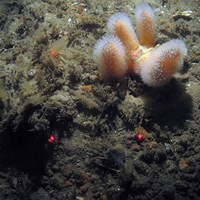 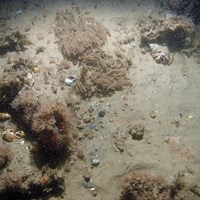 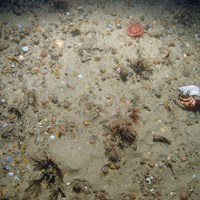