Solan Bank Reef is located 50 km from the Scottish mainland, north of Cape Wrath. The reef is situated on a geological feature known as 'Solan Bank High'.

The site has been identified for two types of Annex I reef habitat, bedrock and stony reef, which are evident across the site. The exposed bedrock provides an underwater landscape of seacliffs, reaching around 10 m in height, to smoother, undulating features created by moving glacial ice known as roches moutonnées. Most of the site lies within a shallow depth range of 60 m to 80 m below sea-level with extremes in the south-east (around 20 m) and in the north of the site (more than 90 m). The reef is home to a variety of encrusting bryozoans and corraline algae, brittlestars, cup corals, jewel anemones, red algae and rare sponges.

The acquisition of new data may result in updates to our knowledge on feature presence and extent within this site. The most up-to-date information is reflected on the map in this section and in JNCC’s MPA mapper and the evidence underpinning this can be viewed in the Evidence section.

The diagram below is a summary of the key milestones involved in the selection and designation of Solan Bank Reef SAC. More detail can be found in the Relevant Documentation section.

December 2011
Site formally recommended to the Scottish Government as a draft Special Area of Conservation (SAC).
August 2012
Impact Assessment and report on public consultation submitted. Site becomes a possible SAC.
October 2012
Submitted to the European Commission. The Habitats Regulations now formally apply to this MPA.
November 2013
Site is approved by the European Commission as a Site of Community Importance (SCI).
September 2017
Site is formally designated as a SAC by UK Government.

Information for this site summary was adapted from the SAC Selection Assessment Document and incorporates any further information gathered since these documents were produced. Please refer to this document in the Relevant Documentation section for further details and information sources.

Solan Bank Reef SAC is located approximately 50 km from the Scottish mainland, north of Cape Wrath. The reef is located on the Solan Bank High, a Precambrian geological feature of metamorphic basement rock 130 km long and 25 km wide with sections of sand and clay. The site is surrounded by the North Rona, North Lewis, North Minch and West Orkney basins and between the East Rona High to the west and Nun Rock-Sule Skerry High to the east. The majority of the site lies in water depths of 60–80 m. However to the south-east of the site an outcrop of bedrock reef rises to approximately 20 m below the sea surface, while the north of the site extends to more than 90 m water depth.

The site represents the Annex I reef sub-types 'bedrock' and 'stony' reef. Bedrock outcrops create areas of high topography, with linear features (thought to be bedrock joint planes) forming cliffs of up to 10 m in height above the surrounding seabed. Elsewhere the bedrock forms smooth and undulating features known as roches moutonnées, created by the scour effect of moving glacial ice. Stony reef comprised of boulders and cobbles with a sandy veneer occurs in ridges to the north-west and south-west of the site; these most likely represent glacial moraine ridges (the tracks of sediment carried by glacial ice). Boulders and cobbles also occur in the larger crevices in the bedrock while smaller rock fissures are filled with a mixture of coarse sand and shell/gravel veneer. A veneer of sand occurs over the flat bedrock surfaces, indicating that sediment scour is a significant factor across the site.

The reefs are characterised by encrusting fauna, mainly encrusting bryozoans and encrusting coralline algae in the shallower areas. Cup corals are present throughout the site, and brittlestars are common on both the bedrock and stony reef. Areas of flatter bedrock subject to sediment scour have a lower diversity of fauna than more sheltered areas. The highly scoured reef is mainly colonised by the keel worm Pomatoceros triqueter, while a range of sponges, bryozoans and hydroids occur on less scoured reef areas. Water movement created by tidal streams and wave action is greater in shallower areas and here there is a higher abundance of species such as the soft coral Alcyonium digitatum, the cup coral Caryophyllia smithii and the jewel anemone Corynactis viridis. Foliose red algae and kelp grow in the shallowest locations where light penetrates the water.

Annex I reef habitat is also protected in the nearby North Rona SAC (in Scottish territorial waters) where a variety of rock habitats from the intertidal (littoral) through to 50 m depth (deep circalittoral) occur. These reefs support rich marine communities typical of rock exposed to high wave energy. Further detail on the evidence for this SAC can be found in the Evidence section.

Site boundary description: The site boundary for Solan Bank Reef SAC has been defined using JNCC’s marine SAC boundary definition guidelines. The boundary is a relatively simple polygon enclosing the minimum area necessary to ensure protection of the Annex I habitat. As any bottom trawling that occurs in the area may pose a threat to the reef, the site boundary includes a margin to allow for mobile gear on the seabed being at some distance from the location of a vessel at the sea surface. The maximum depth of water around the feature is approximately 100 m; assuming a ratio of 3:1 fishing warp length to depth on the continental shelf, the boundary is defined to include a margin of 300 m from the bedrock and stony reef feature.

The full overview of the data used to support site identification along with information on confidence in feature presence and extent is available in the Solan Bank Reef SAC Selection Assessment Document. JNCC will be adding relevant survey data for this MPA to its MPA mapper in due course.

Some of the data for this SAC have been collected through JNCC-funded or collaborative surveys and some through other means. Data from this survey provide direct evidence confirming the presence of the protected feature within the site.

References for further supporting scientific literature consulted during the identification of this site can be found in the Solan Bank Reef SAC Selection Assessment Document. Please be aware that although these sources contain information in relation to this MPA, they do not necessarily represent the views of JNCC.

The conservation objective for the protected feature of the MPA is to maintain or restore the reef at/to favourable condition, such that the:

JNCC is working to provide more detailed advice on the relatively broad, high-level conservation objective listed above. This supplementary advice will be posted here as and when it becomes available.

In line with Regulation (21) of The Conservation of Offshore Marine Habitats and Species Regulations 2017 (as amended) which apply to the UK’s offshore marine area, and Regulation 33(2) of Habitats Regulations 1994 (as amended in Scotland), which apply to Scotland’s inshore waters, the advice on operations for the protected feature of the Solan Bank Reef SAC outline current knowledge of the nature and extent of activities taking place which may have a significant impact on the feature for which a site has been selected.

JNCC also provides a list of activities occurring within the site and information on activity management in the Activities and Management section. This information is also useful when assessing an activity, plan or project which may affect the protected feature, and JNCC has provided this to aid the cumulative assessment of impacts of human activities within the site. While every attempt has been made to ensure this information is accurate and kept up-to-date, the list is not to be considered exhaustive or definitive. The list does not, for example, include activities occurring off-site which may also be capable of affecting the protected feature.

The information contained within the advice on operations, Activities and Management section, Evidence section, and MarLIN’s sensitivity assessments are useful if you are:

Our scientific understanding of the ecology of the site, its integrity and its qualifying feature and how activities can affect them may change over time. Conservation advice provided by JNCC and Scottish Natural Heritage (now NatureScot) will be kept under review and will be periodically updated to reflect this. Conservation advice for sites which straddle the 12 nm boundary will continue to be developed jointly with the relevant country nature conservation body. Further information on JNCC’s conservation advice work is available on our 'Conserving MPAs' webpage.

This site forms part of the networks of MPAs across the UK and contributes to international MPA networks such as that of the North-east Atlantic under OSPAR. As the UK is a contracting party to the OSPAR Commission, JNCC is committed to ensuring that the OSPAR MPA network is  well-managed.

The sub-sections that follow provide an account of the progress of Solan Bank Reef SAC around each of the four stages in the MPA management cycle.

No condition monitoring surveys have been undertaken however surveys were undertaken in 2008 on the Annex I reef feature and in 2014 on the seabed habitats as part of the UK’s obligations under the Marine Strategy Framework Directive (MSFD). Further information is provided in the Evidence section and Monitoring section.

For MPAs, data and evidence collected from monitoring activities will aim to: 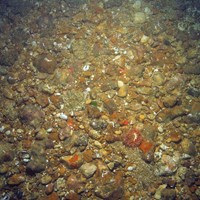 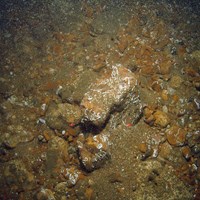 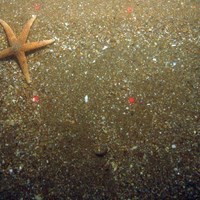 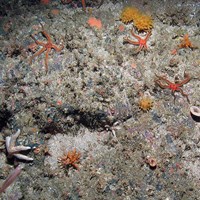 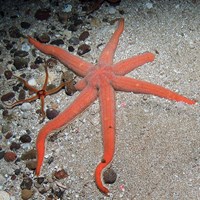 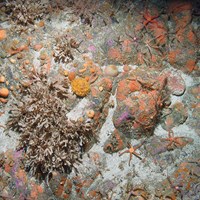 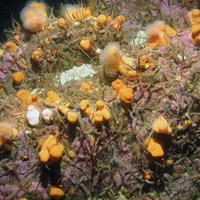 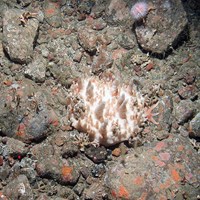 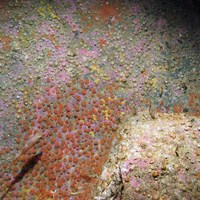 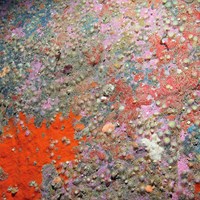 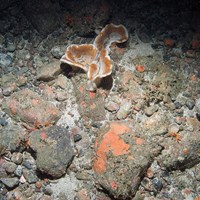 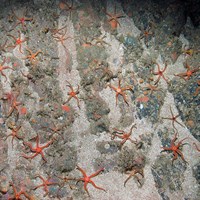 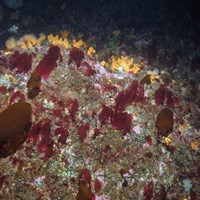 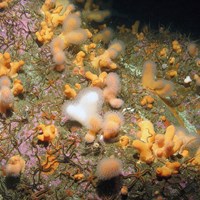