The UK government has committed to identify and designate pilot Highly Protected Marine Areas (HPMAs) in English waters. Defra, JNCC, Natural England, Cefas, the Marine Management Organisation, the Association of Inshore Fisheries and Conservation Authorities, and the Environment Agency will work together, with stakeholders, to identify potential pilot sites.

Highly Protected Marine Areas (HPMAs) are areas of the sea designated for the protection and recovery of marine ecosystems. They prohibit extractive, destructive, and depositional uses, allowing only non-damaging levels of other activities to the extent permitted by international law.

By setting aside some areas of sea with high levels of protection, HPMAs will allow nature to recover to a more natural state, allowing ecosystems to thrive. Their key purpose is biodiversity recovery.

Government responded to the recommendations of the Benyon Review and committed to designate a number of pilot HPMAs in English waters.  Government will use powers under the Marine and Coastal Access Act (2009) to bring forward pilot HPMAs.

During this pilot phase of HPMAs we aim to improve our understanding of:

How we will identify pilot HPMAs

Government set out that pilot HPMAs in English waters will be identified based on ecological, social and economic criteria, to select sites that provide the maximum biodiversity benefits while seeking to also maximise associated benefits and minimise impacts to sea users.

Pilot English HPMAs may be inside or outside of the existing MPA network, in inshore and offshore areas, recognising that HPMAs must be in the locations best able to deliver protection and recovery.

Defra asked JNCC and Natural England, working with Cefas, the Marine Management Organisation (MMO), the Association of Inshore Fisheries and Conservation Authorities, and the Environment Agency, to identify potential locations for pilot English HPMAs. Third parties were also invited to propose locations for consideration as pilot English HPMAs to JNCC and Natural England based on ecological criteria.

JNCC and Natural England, along with Cefas, developed ecological criteria to start selecting potential English HPMA locations. These criteria are based on the principles outlined in the Benyon Review and are provided in the table below:

Natural England and JNCC worked together to identify locations that met these ecological criteria, ensuring that there was a range of inshore and offshore locations in different regional seas.

JNCC and Natural England invited stakeholders to propose locations that met the ecological criteria. The submission process closed on 31 August 2021.

Government are designating English HPMAs for the protection and recovery of the sea. In piloting the process to designate English HPMAs, third parties were asked to avoid proposing locations with industrial physical structures or consented activities that are unable to adapt to the location of a HPMA.

After considering third-party proposals, alongside areas they identified, Natural England and JNCC developed an initial list of potential sites which was submitted to Defra for further social and economic consideration. Defra and the MMO then applied social and economic criteria to help narrow down the list. This included, but was not limited to, understanding what economic activity occurs in potential sites and the scale and importance of that activity and site to local communities. JNCC and Natural England provided advice to Defra which sets out how the ecological assessments were undertaken against the ecological criteria

A consultation on candidate pilot English HPMAs was run by Defra between 6 July 2022 and 28 September 2022.

Additional evidence gathering also occurred throughout 2022 to ensure that we use the best available evidence. This included site-specific engagement with local stakeholders to collect further evidence on the social and economic criteria. Consultation responses and any additional evidence will be analysed to provide an up to date assessment for each proposed English HPMA before Ministers decide which sites to designate.

Defra commissioned Natural England and JNCC to produce high-level conservation advice for HPMAs under Section 127 of Marine and Coastal Access Act (MCAA), to support Public Authorities to fulfil their duties when candidate HPMAs become material consideration. This occurred at the point of public consultation on 6 July 2022.

In consultation with Defra, the Marine Management Organisation and the Environment Agency, JNCC with Natural England have developed this high-level conservation advice which was published in November 2022 and is available through JNCC's Resource Hub.

The high-level conservation advice is provided under Section 127 of the Marine and Coastal Access Act, advising on matters which are capable of damaging or otherwise affecting the protected feature and thereby likely to hinder the conservation objective of a HPMA.

Roles of Defra and its Arms-Length Bodies

Defra has overall responsibility for the selection and designation of English HPMAs. Defra Ministers will decide which proposed English HPMAs to consult on and designate. JNCC and Natural England will lead on developing the ecological criteria, with support from Cefas, and also the third-party proposal process and identification of potential sites against these criteria. Defra and the MMO, with input from the Association of IFCAs, will lead on developing social and economic principles and criteria. Defra, MMO and the Association of IFCAs will work together on local stakeholder engagement and the provision of data, which will allow the identification of proposed English HPMAs that minimise social and economic effects.

The process for identifying potential pilot English HPMAs up until the point of public consultation is shown in the figure. 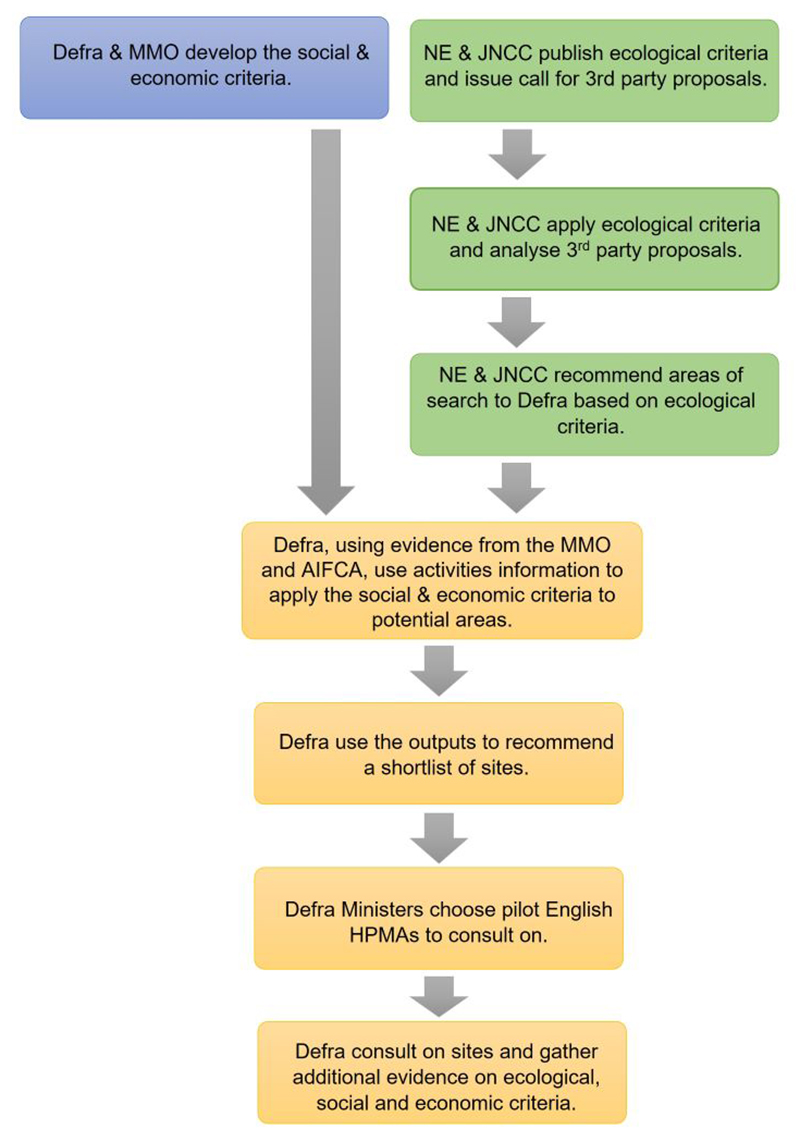