JNCC is leading on the development of several indicators that will help to assess progress towards achieving Good Environmental Status under the UK Marine Strategy. Some of these indicators require information on the distribution of seabed habitats; however, lack of full-coverage survey data means there are gaps where the habitats have not been observed. Habitat modelling provides a way to predict the suitability of an area of seabed for a habitat and therefore offers to improve our understanding distribution of certain habitats. Three seabed habitats chosen to test the methods for assessing these indicators were: Modiolus modiolus (Horse mussel) beds, Sabellaria spinulosa (Ross worm) reefs and subtidal Zostera marina (eel grass) beds.

These habitat suitability models were developed by JNCC in 2019/2020. The results of which consist of a raster which shows the predicted suitability for the establishment of these habitats. For each suitability raster, a second raster was produced which presents the standard deviation of suitability values, which is used as an indicator of confidence.

The results of the habitat distribution models are freely available to download from the JNCC Resource Hub for Modiolus modiolus beds, Sabellaria spinulosa reefs and Zostera marina beds.

A combined methods report for all three models is also available from the JNCC Resource Hub:

Sabellaria is often found in areas of high water movement and it requires sand in suspension to build its tubes. Therefore it is understandable that current energy and light attenuation drive the distribution of this habitat as they are proxies for the amount of suspended sediments in the water column. Salinity can affect this habitat’s suitability conditions however other authors state that effects of salinity on Sabellaria distribution is unclear; Sabellaria spinulosa is found mostly in full saline conditions but also in environments with variable salinity. Temperature was found to be an important variable in regional-scale OSPAR models, however others describe S. spinulosa as tolerant to various ranges of temperature changes. 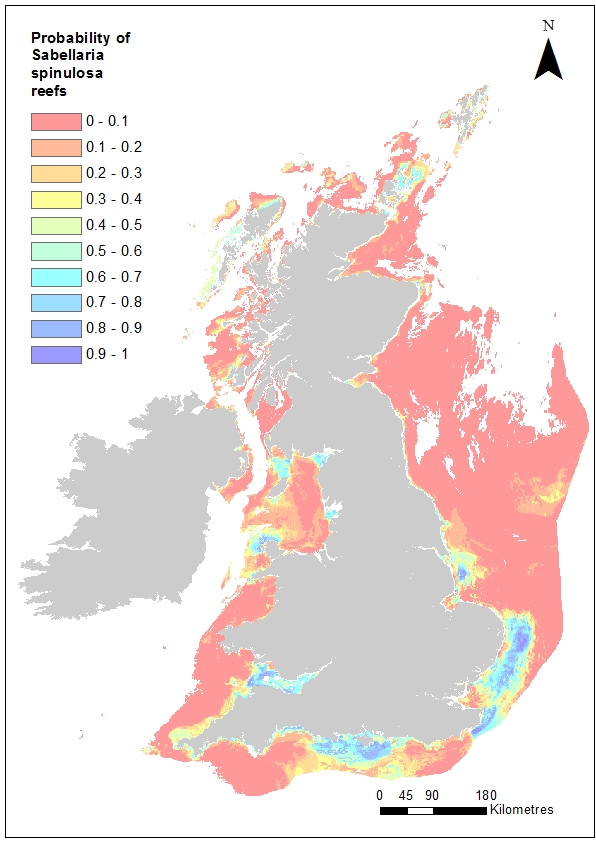 Substrate was one of the selected variables in the model, but one of the least important, probably due Sabellaria being found in a wide range of substrate types.

The results of the model have shown that the minimum salinity at seabed is an important environmental variable to consider as Modiolus modiolus which is to be expected as they are known to be sensitive to changes in salinity making them dependant on deeper subtidal regions. Current speeds are shown to be the second most important variable to consider when modelling M. modiolus distribution. Currents speeds have been suggested to be important factor, however there is disagreement whether M. modiolus prefer non-mobile substrates in the absence of excessive currents or tidally swept regions where currents can reach 10 cms-1. 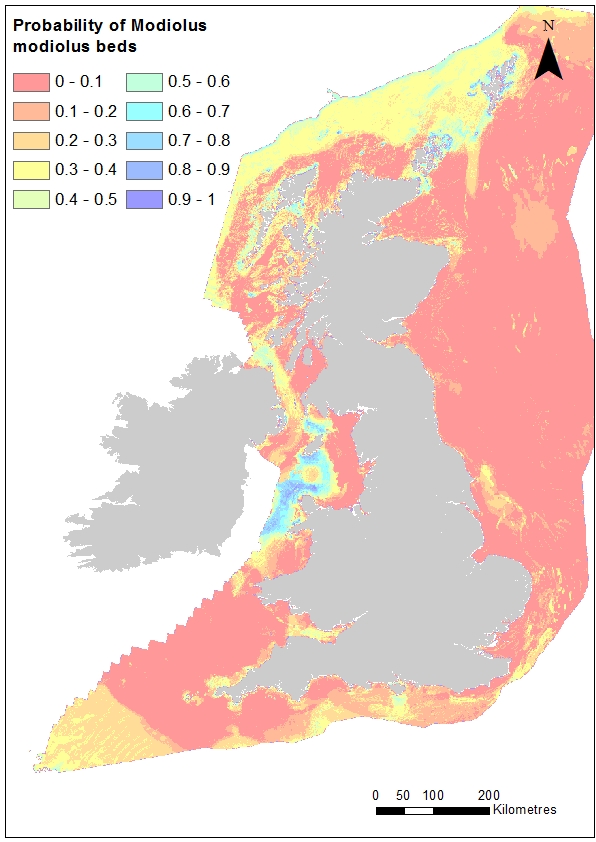 The results of this study have not clarified this disagreement but do support the suggestion that current speeds are an important variable to consider when modelling M. modiolus distribution.

Depth and amount of sunlight reaching the seabed were found to be important variables affecting the distribution of Zostera marina distribution within this model. Bottom temperature had the highest importance value, indicating that it is a key factor for Zostera marina growth.

Other studies on the distribution of Zostera marina have included wave exposure as a predictor variable. However, this study has shown that it does not have a high importance value for the model. This may be due to the resolution of the dataset used being insufficient to capture small-scale variability. 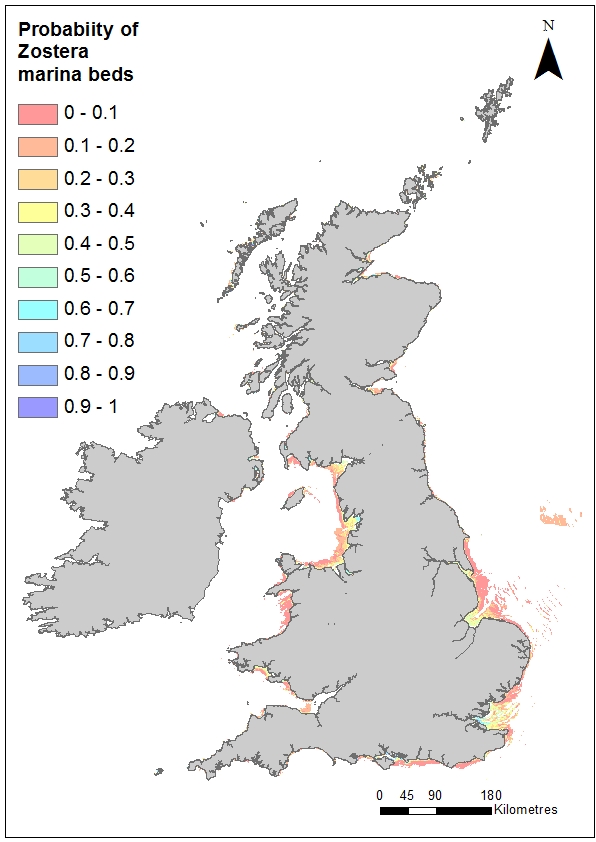 Patches of Modiolus modiolus bed habitat suitability around the east coast of England
(Norfolk coast) appear misleading as beds are not known to occur there. Furthermore, these areas are known distributions of Sabellaria spinulosa which require silty, turbid conditions to construct their tubes and reefs, whereas Modiolus modiolus are known to suffer from smothering. The model may be focusing more on suitable environmental conditions but does not consider habitat specific factors known to influence Modiolus modiolus distribution, such as larval dispersal or connectivity