The North Anglesey Marine SAC extends from the northern coast of the Isle of Anglesey into the Irish Sea, and has been identified as an area of importance for harbour porpoise.

Stretching from the northern coast of the Isle of Anglesey into the Irish Sea, the North Anglesey Marine SAC has been identified as an area of importance for harbour porpoise, covering an area almost five times the size of Anglesey.

The North Anglesey Marine SAC overlaps a range of other habitats, including coarse and sandy sediments, rock, and mud. Encompassed within the site is the Croker Carbonate Slabs SAC which was designated for submarine structures made by leaking gases.

More detailed site information can be found within the Summary section below. 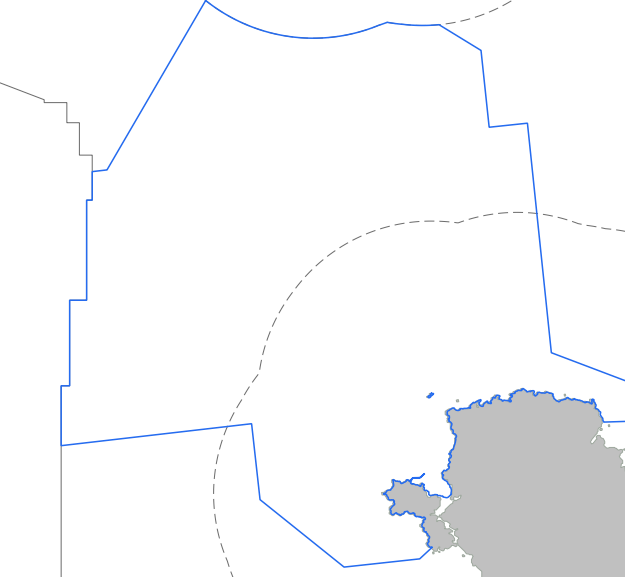 The diagram below is a summary of the key milestones involved in the selection and designation of the North Anglesey Marine SAC.  More detail can be found in the Relevant Documentation section or in the sections below.

Some documents below, relating to the North Anglesey Marine SAC, were produced during the selection and designation process and therefore may not be updated from point of submission to Europe in January 2017. This Site Information Centre is the most up-to-date source of information for this site and will reflect any additional information gathered since our advice to Government in 2016.

The North Anglesey Marine SAC has been designated for the protection of the harbour porpoise Phocoena phocoena, and is estimated to support 2.4% of the UK Celtic and Irish Seas Management Unit (MU) population. Situated off the northwest corner of Wales, this site extends from the Anglesey coast into the offshore waters (> 12 nm) between Ireland and the Isle of Man, and it is therefore the joint responsibility of both Natural Resources Wales (NRW) and JNCC to provide statutory advice.

Covering an area of 3,249 km2, this sites spans water depths which range from the Mean Low Water (MLW) level down to 100 m along the western boundary, though much of the site is 50 m or shallower. The site covers a mix of habitats, including areas of rock, coarse and sandy sediments, and mud.

Survey data collated through the Joint Cetacean Protocol (JCP) were analysed to identify areas with persistently high harbour porpoise occurrence. The modelled outputs of this analysis demonstrate that the North Anglesey Marine SAC persistently contains densities of porpoises which are within the top 10% of those for the Management Unit. The population estimate for harbour porpoise in the North Anglesey Marine SAC was based on data collected during the SCANS-II survey, which took place in July 2005. Further detail on the evidence for this SAC can be found in the Evidence section.

Site boundary description: The North Anglesey Marine SAC boundary was defined based on predicted areas with high densities of harbour porpoise identified through data modelling over an 18-year period. As a general principle, site boundaries were drawn tightly around the qualifying feature. The seaward boundaries were drawn using straight lines where possible; however, a balance was needed between more-complex site shapes drawn tightly around the feature and simple square/rectangular boundaries, so that the area of 'non-interest-feature' within the boundary was reduced. Further boundary principles were developed due to the nature of the modelled output. The modelling approach used 5 x 5 km grids, and so the model output was "blocky", and further boundary smoothing methods were applied to simplify the boundary, without altering the site area by more than 5%. Coastal edges were defined by the "Mean Low Water" (MLW) tide line.

The survey data analyses underpinned the identification of the North Anglesey Marine SAC as an area with persistently higher density of porpoises in relation to other areas (IAMMWG, 2015).

For further information on the data used and the process applied to identify the SAC, please consult the North Anglesey Marine Selection Assessment Document, and Section two of 'The use of harbour porpoise sightings data to inform the development of Special Areas of Conservation in UK waters' (JNCC Report No. 565). Further documents are also listed below in support of the identification of the North Anglesey Marine SAC:

References for further supporting scientific literature consulted during the identification of this site can be found in the North Anglesey Marine SAC Selection Assessment Document. lease be aware that although these sources contain information in relation to this MPA, they do not necessarily represent the views of JNCC.

The conservation objectives for the North Anglesey Marine SAC are: to ensure that the integrity of the site is maintained and that it makes the best possible contribution to maintaining Favourable Conservation Status (FCS) for harbour porpoise in UK waters.

In line with Regulation 21 of The Conservation of Offshore Marine Habitats and Species Regulations 2017, which apply to the UK’s offshore marine area, and Regulation 37(3) of The Conservation of Habitats and Species Regulations 2017, which apply to Welsh inshore waters, the advice on operations for the protected feature of the North Anglesey Marine SAC outlines knowledge of the nature and extent of activities taking place at the time of writing which may have a significant impact on the feature for which a site has been selected.

The advice on operations is based on the scientific knowledge of harbour porpoise of JNCC and Natural Resources Wales at the time of writing, and their sensitivities to pressures. For the most up-to-date information about harbour porpoise within the site and the spatial distribution, please see the Evidence section.

The advice on operations summarises ongoing activities occurring within or close to the site, with an assessment as to whether they pose a risk to harbour porpoise. This information is useful when assessing an activity, plan or project which may affect the protected features, and JNCC has provided this to aid the cumulative assessment of impacts of human activities within the site. While every attempt has been made to ensure this information is accurate and kept up-to-date, the list is not to be considered exhaustive or definitive. The list does not, for example, include activities occurring off-site which may also be capable of affecting the protected features.

Our scientific understanding of the ecology of the site, its integrity and its qualifying feature and how activities can affect it may change over time. The conservation advice provided by JNCC and Natural Resources Wales will be kept under review and will be periodically updated to reflect this and surveillance required under Article 17 of the Habitats Directive. Conservation advice for sites which straddle the 12 nm boundary will continue to be developed jointly with the relevant country nature conservation body. Further information can be found on the Natural Resources Wales website.

Natural Resources Wales will provide separate advice for sites which are their joint responsibility with JNCC and/or Natural England.

Every six years, Member States are required under Article 17 of the EU Habitats Directive to report on the conservation status of habitats and species listed under Annex I and II. For harbour porpoise, the Article 17 assessments consider conservation status both within the Natura 2000 network and in the wider sea with particular emphasis placed on status and trends in terms of population size, range and habitat quality. These assessments will also feed into six-yearly reports on the state of the marine environment under the Marine Strategy Framework Directive (MSFD).