A2. Taking action for nature: volunteer time spent in conservation

This indicator presents an index of the number of hours worked by volunteers for 14 UK conservation charities and public bodies (including National Parks England which represents all National Parks in England – see background section for a full list). Conservation volunteering includes any voluntary activity for an organisation or community undertaken to: further the understanding, protection or enjoyment of the natural environment, including wildlife recording and surveying; practical countryside management; providing education, training and guided walks; and administration or other office support.

The amount of time people spend volunteering to assist with conservation in part reflects society’s interest in and commitment to biodiversity.

Between 2000 and 2018, the amount of time volunteers contributed to conservation activities in the UK increased by 53%. It also increased by 11% in the 5 years to 2018 and by 5% in the most recent year available.

Figure A2i. Index of volunteer time spent on conservation activities with selected environmental organisations in the UK, 2000 to 2018. 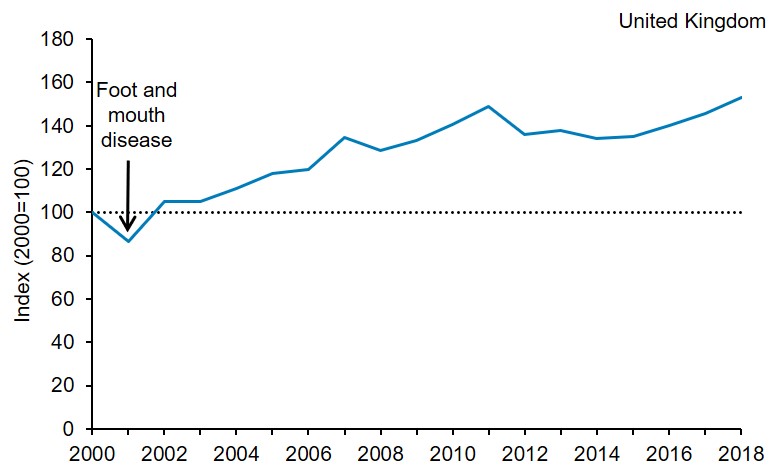 Assessment of change in volunteer time spent in conservation

A decrease in time spent volunteering between 2000 and 2001 can be attributed to a decline in all conservation activity due to controls on countryside access during the Foot and Mouth Disease outbreak. The small peak in volunteer time in 2007 was largely driven by an increase in volunteer numbers at The Conservation Volunteers which initiated a number of large youth programmes in that year. The 2011 high point, however, was driven by increases in the volunteer hours reported by 9 of the 14 organisations in the indicator and the subsequent decrease in 2012 was due to a drop in the number of volunteers across seven of the organisations, most notably: the British Trust for Ornithology, The Wildlife Trusts, The Conservation Volunteers and the RSPB. The high point in 2018 is due to all organisations except one recording an increase in volunteer time. These changes reflect: (i) the cyclical nature of some projects undertaken, such as tree planting and work on specific nature reserves and (ii) the revised methodologies used to survey and record the number of volunteer hours.

More recently, the indicator remained relatively stable between 2012 and 2015 and showed a gradual increase in 2016, 2017 and 2018. Although the indicator has increased by a little over 11% in the 5 years since 2013, trends reported by individual organisations vary considerably. For instance, the Canal & River Trust (formerly known as British Waterways) reported an increase in volunteer hours of more than 87%, whereas The Conservation Volunteers reported a decrease of about 37%. Increased volunteering with the Canal & River Trust is likely due to the organisation’s policy to actively recruit additional volunteers (in place since 2011); decreased volunteering with The Conservation Volunteers is due to higher figures up to 2011 (with a peak in 2007) and a gradual decline after 2014. Notably, from 2017 to 2018, the Botanical Society of Britain and Ireland reported an increase in survey volunteer time of nearly 87%. Many of these trends reflect the cyclical nature of projects undertaken by different organisations.

Volunteer time is one way of assessing the level of public engagement with biodiversity. Volunteering for conservation charities is critical to the successful delivery of many of the objectives of the country biodiversity and environment strategies – for example, volunteers collect much of the data used for monitoring the status of species and also undertake practical work to manage threatened habitats.

The indicator is based on data on volunteer hours supplied by 14 conservation charities and public bodies operating in the UK:

Table A2i provides information on whether the organisations contributing to the indicator provided data for the whole or part of the United Kingdom or Great Britain (England, Scotland and Wales).

Some organisations were able to provide accurate figures for the number of hours worked; others provided estimates based on the number of volunteers and an estimate of average days worked by their volunteers each year.

The methodology used by conservation charities can change from year to year. This can cause fluctuations in the data, particularly where there are revised methods used by charities that have previously recorded large amounts for total volunteer hours. In 2014, The Wildlife Trusts improved their methodology to more accurately record volunteer hours and to only report activities undertaken by registered volunteers, rather than those undertaken by registered and casual volunteers. This resulted in a 40% drop in recorded hours for that year. As The Wildlife Trusts accounted for 20% of the total number of volunteer hours in 2014, this change had a noticeable effect on the overall trend and it was largely responsible for the significant fall in the indicator from 2013 to 2014 that has been reported in previous publications. It also had a negative impact on the short-term assessments of this indicator reported in 2016 and 2017. Rather than continuing to allow this methodological change to adversely affect the results, when the actual fall in volunteer hours was much smaller than that previously reported, Defra statisticians obtained additional information from The Wildlife Trusts. This information has been used to scale the data from 2000 to 2013 in such a way that it now provides estimates for volunteering that are broadly equivalent to those provided under the new methodology. While the chart, values and accompanying datasheet are therefore not comparable to those in previous publications, they do present a clearer trend for conservation volunteering in the UK since 2000.

In broad terms, the type of work undertaken by volunteers falls into four categories:

Not every organisation provides the breakdown of volunteering hours shown in Figure A2ii, and therefore the trends shown in this figure are different from the overall assessment in Figure A2i.

Volunteer hours relating to all 4 of the work categories listed above have all increased in 2018 (Figure A2ii). The 2011 to 2013 peak in ‘countryside management & advisory support’ was driven by several organisations, most notably the RSPB and the Woodland Trust reporting a higher than average number of volunteer hours for this category. The sharp rise in hours relating to ‘other conservation work’ in 2010 was driven by the RSPB and the sharp fall in hours relating to ‘administrative or office support’ by the British Trust for Ornithology, the latter reporting an end to the ‘Bird Atlas Project’ as a reason for the decrease. Historically, organisations have reported that changes are due to shifts in strategic focus that result in significant adjustments to projects such as tree planting. They have also cited the need to consider changes to volunteer numbers in order to comply with health and safety regulations.

Figure A2ii. Index of volunteer time spent on conservation activities with selected environmental organisations in the UK, by category of work, 2000 to 2018. 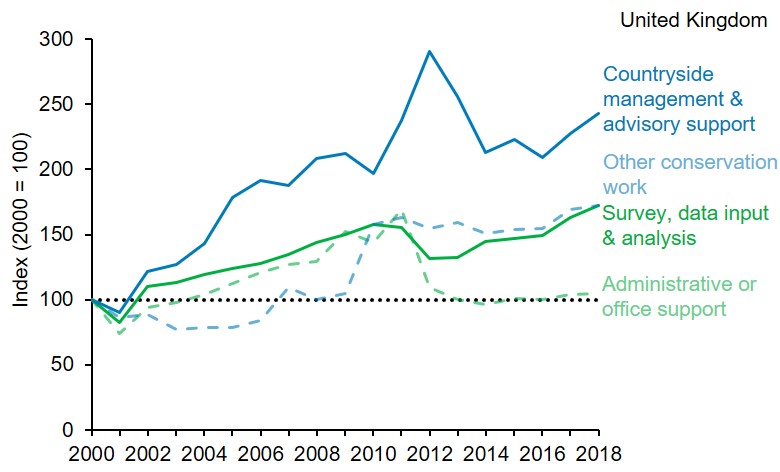