Fluctuations in areas of land under agri-environment agreements over time can occur as a result of the introduction of new schemes and the ending of previous scheme agreements. Existing agreements will continue to be honoured until they expire.

Figure B1ai. Area of land covered by higher-level or targeted agri-environment schemes, 1992 to 2020. 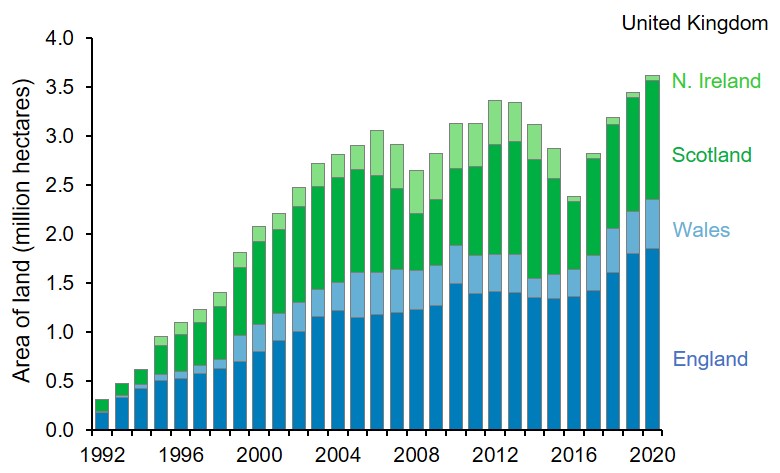 1. The following schemes have been included as higher-level or targeted agri-environment schemes:

2. Higher-level schemes have stricter criteria for qualification than other agri-environment schemes.

Note: Long- and short-term assessments are based on a 3% rule of thumb. Where possible, the base years for these assessments use a three-year average. See Assessing indicators.

There are two main types of agri-environment scheme in the UK:

It is possible for land to be in both an entry-level type and a higher-level scheme. For example, the majority of HLS agreements in England are underpinned by an ELS agreement; therefore the areas of land in higher-level and entry-level schemes cannot be added to provide a grand total. Since the mid-1990s there has been a steady increase in UK land under agri-environment scheme management. Assessment is based on a three-year average from the baseline, using the three earliest consecutive years available.

In 1992, there were 0.3 million hectares of land in the UK in higher-level agreements or targeted schemes, and by 2020 this had risen to just over 3.6 million hectares. The higher-level scheme measure is assessed as increasing in the long term, since 1992. During this period some of the original schemes closed to new applicants. The area of land covered by higher-level schemes fluctuates between years as a result of changes to schemes: expiry of agreements and uptake of new ones; and amendments to existing agreements or land transferring from one farmer to another. In the shorter term, schemes that started under the previous Rural Development Programmes closed to new applicants in 2013 to 2014. New schemes have subsequently been implemented but at different times in the different countries. This has influenced uptake – for example, Northern Ireland’s most recent agri-environment scheme did not start until July 2017. The short-term assessment shows an increase of 18%.

In 2020 farms with higher-level or targeted agri-environment agreements accounted for: 20% of area on agricultural holdings in England; 30% in Wales; 21% in Scotland; and 5% in Northern Ireland. 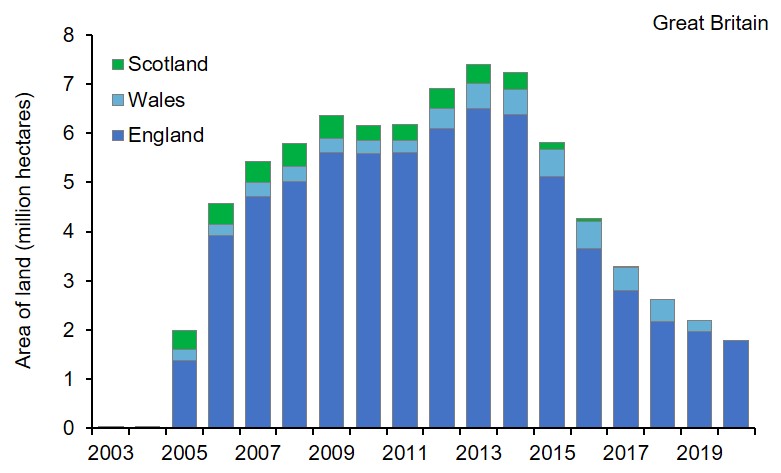 1. The following have been included here as entry-level type schemes:

Scotland: Land Management Contracts (previously Menu Scheme); Land Managers Options Schemes; Habitat Scheme. All of these schemes had closed to new applicants by 2014 or earlier with the last agreements recorded in 2017.

2. Entry-type schemes have less strict criteria for qualification than the higher-level schemes shown in the previous chart.

3. The area of land covered by entry-type schemes is shown to decrease mainly as a result of ELS-only agreements in England beginning to expire following the closure of this scheme in December 2014.

Entry-level schemes were introduced as a pilot in England in 2003, with 0.03 million hectares under agreement, and then rolled out in 2005. Similar entry-type schemes were also introduced in 2005 in Scotland, and in Wales (as Tir Cynnal), and the area in these whole-farm agreements rose rapidly to 7.4 million hectares in 2013, however decreased to 1.8 million hectares in 2020. The measure of entry-level schemes has been moved to the background in the 2021 publication as Environmental Stewardship in England closed to new agreements in 2014 and ELS-only agreements have started to expire (existing agreements will continue to be honoured until their expiry date).

Agriculture is a major land use in the UK (Utilised Agricultural Area covered 71% of land in the UK in 2020) and rapid changes to agricultural practice in the past have been linked to declines in wildlife, such as farmland birds. Since 1987 a number of voluntary agri-environment schemes have been introduced that provide payments to farmers to protect and enhance biodiversity, landscapes and historic features, and to promote public access.

In England, Environmental Stewardship (ES) closed to new applicants in December 2014 and was replaced by a new agri-environment scheme, Countryside Stewardship (CS), for which agreements started in January 2016. Existing higher-level and entry-level agreements will continue until they expire. HLS agreements will continue, with the majority of agreements expiring by 2024. The new Countryside Stewardship scheme brings together many schemes including catchment-sensitive farming and woodland grant schemes. Both Mid-Tier and Higher-Tier CS schemes are more targeted; the applicant is expected to ensure the options they take address the priorities for their land. There is a notable difference to the measurement of area included in the indicator, as ES is measured as “area of the farm” whereas CS, is measured as total area of options taken, that is, the actively environmentally managed area. Differences in scheme reporting need to be borne in mind when interpreting the transition years, for example, where ELS and HLS have stopped and CS schemes are starting, there may be a dip in the Figure B1ai.

In Wales, the Welsh Government introduced an entry-level agri-environment scheme known as Tir Cynnal in 2005. Tir Cynnal supplemented Tir Gofal, a higher-level agri-environment scheme which had been available throughout Wales since April 1999. Tir Gofal aimed to encourage agricultural practices which protect and enhance the landscapes of Wales, their cultural features and associated wildlife, and replaced the previous Environmentally Sensitive Areas and Tir Cymen schemes. A new sustainable land management scheme, Glastir, was introduced in 2012 which replaces five existing agri-environment schemes; Tir Cynnal, Tir Gofal, Tir Mynydd, the Organic Farming Scheme/Organic Farming Conversion Scheme, and Better Woodland for Wales. The scheme has an entry-level component – Glastir Entry (previously the All Wales Element) – and a higher-level component – Glastir Advanced (previously the Targeted Element). The first agreements for the entry-level components commenced on 1 January 2012; the first higher-level scheme agreements began on 1 January 2013. In addition, there is a component specifically for common land, Glastir Commons. However, this is not included in this indicator; in 2020 Glastir Commons covered 114,000 hectares, a small decrease from 2019.

In Scotland, schemes are designed to encourage farmers, crofters and common grazing committees to adopt environmentally friendly practices and to maintain and enhance particular habitats and landscape features. The Land Management Contract Menu Scheme was introduced as an entry-level scheme under which land managers chose from a menu of options to put together a package for their farm. With the introduction of the Scotland Rural Development Programme (2007 to 2013), this became Rural Development Contracts (RDC) – Land Managers Options, sitting alongside RDC – Rural Priorities. They provide contracts between land managers and the government to implement measures designed to deliver environmental, social and economic benefits from farming and crofting. Since 2009, Figure B1ai includes the area under RDC – Rural Priorities Options. Rural Priorities and Land Managers Options closed to new applicants in 2013 and 2014, respectively. In 2015, a new Agri-environment Climate Scheme was launched with the first agreements going live in 2016.

In Northern Ireland, the Countryside Management Scheme closed to new applicants in 2013 although a small number of agreements commenced on 1 January 2013, resulting from applications made prior to 2013. All agreements in the Environmentally Sensitive Areas Scheme expired in 2016. As a result, the area under agri-environment schemes has declined since 2013 due to agreements ending. A new Environmental Farming Scheme was launched in 2017; existing agreements in closed schemes continue to be honoured until they expire.

Target 3: By 2020, at the latest, incentives, including subsidies, harmful to biodiversity are eliminated, phased out or reformed in order to minimize or avoid negative impacts, and positive incentives for the conservation and sustainable use of biodiversity are developed and applied, consistent and in harmony with the Convention and other relevant international obligations, taking into account national socio economic conditions.

Target 7: By 2020, areas under agriculture, aquaculture and forestry are managed sustainably, ensuring conservation of biodiversity.