This is a context indicator and is not assessed; it is shown to highlight a biological response to climate change and a potential pressure on biological systems. It shows the impact of temperature change on the timing of biological events such as flowering or migration in the spring. The UK Spring Index is calculated from the annual mean observation date of the following four biological events: first flowering of hawthorn (Crataegus monogyna), first flowering of horse chestnut (Aesculus hippocastanum), first recorded flight of an orange-tip butterfly (Anthocharis cardamines), and first sighting of a swallow (Hirundo rustica).

Since 1998, the annual mean observation dates have been 8.7 days in advance of the average dates in the first part of the 20th century. 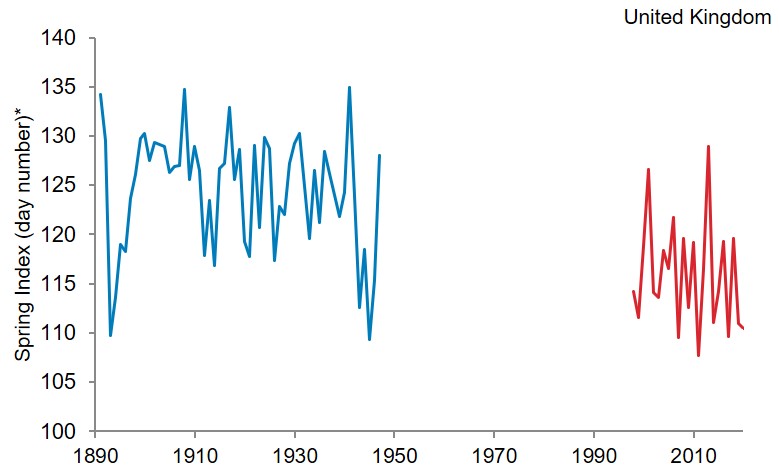 This is a contextual indicator showing how changes in climate, particularly temperature, are associated with changes in the timing of biological events.

The Spring Index for the UK has high year-to-year variability, but since 1998 biological events in the spring have occurred around 8.7 days in advance of the average dates in the period 1891 to 1947 (Figure B4i).

The advancement of spring events is strongly linked to warmer temperatures in March and April. The mean observation dates in 2011 were the earliest for which there are records. The warmest April in the Central England Temperature series (1659 onwards) occurred in 2011 and was almost certainly influential.

Phenology is the study of the timing of recurring natural events in relation to climate, and such observations provide year-on-year information on how nature is responding to a changing climate. This indicator illustrates the stress that one aspect of climate change (spring warming) can place on biological systems. Differential responses among species may cause problems for life cycles (e.g. pollinating insects emerging out of synchrony with flowers opening in spring), increasing vulnerability to extreme events such as late frosts, disruption of food webs, and changing the balance of competition between species.

The global climate is changing. Data from the UK Meteorological Office indicates that the average temperature over the first decade of the 21st century was significantly warmer than any preceding decade in the series of records stretching back over 160 years. Furthermore, it is now known that the second decade (2000 to 2020) was even warmer than the first decade. In 2007, the Intergovernmental Panel on Climate Change (IPCC), concluded that most of the observed increase in global average temperatures since the mid-20th century is very likely to be due to the observed increase in anthropogenic (man-made) greenhouse gas concentrations.

According to the UK Climate Impacts Programme, evidence for the warming of the global climate is unequivocal. The planet's average surface temperature has risen about 2.12 degrees Fahrenheit (1.18 degrees Celsius) since the late 19th century. Most of the warming occurred in the past 40 years, with the seven most recent years being the warmest. The years 2016 and 2020 are tied for the warmest year on record (https://climate.nasa.gov/evidence/). These changes are impacting on the distribution, condition and behaviour of wildlife.

These four events were chosen for the following reasons:

The pre-1948 data were mostly collected by the Royal Meteorological Society (RMS). In 1998, the UK Centre for Ecology & Hydrology revived the UK Phenology Network (UKPN) in the UK, which was launched by the Woodland Trust as a web-based project in 2000. The UKPN has grown since its inception, and now records a series of events in both spring and autumn through the Nature’s Calendar project.

The average value of the Spring Index between 1998 and 2020 is 8.7 days earlier than the average value for 1891 to 1947. The index shows a strong relationship with mean temperature in March and April (Figure B4ii), and it advances more rapidly when the mean temperature equals or exceeds 7°C. The average advance in dates for the Spring Index is 3.2 days for every one degree Celsius below a mean March to April temperature of 7°C, and 7.4 days for every one degree Celsius above 7°. 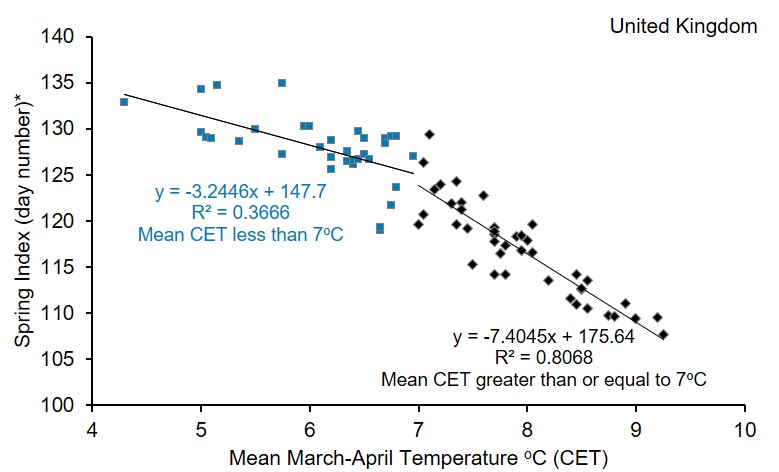 Target 10: By 2015, the multiple anthropogenic pressures on coral reefs, and other vulnerable ecosystems impacted by climate change or ocean acidification are minimised, so as to maintain their integrity and functioning.

Strategic Goal D. Enhance the benefits to all from biodiversity and ecosystem services.