i. Area affected by acidity

The air pollutants sulphur dioxide, nitrogen oxides and ammonia can contribute to acidification; nitrogen oxides and ammonia can also contribute to terrestrial eutrophication. These pollutants arise mainly from burning fossil fuels and from livestock waste. Around a third of UK land area (78,000 km2) is sensitive to acidification, and a third (73,000 km2) to eutrophication (much of this area is sensitive to both). Critical loads are thresholds for pollutant load above which significant harmful effects may occur on sensitive habitats; statistics on critical load exceedance indicate the risk of damage. 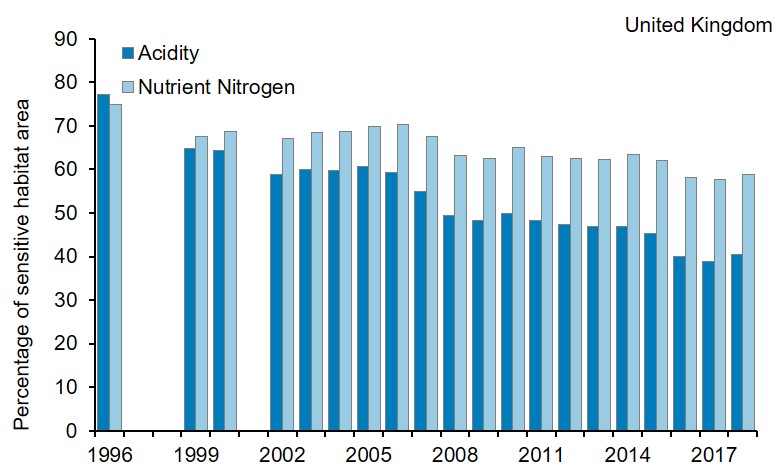 Note: Long- and short-term assessments are based on a direct comparison of the two relevant data points, using a 3% rule of thumb. See Assessing Indicators.

Based on these figures, the habitat areas at risk from acid and nitrogen deposition have declined over the long term (1996 to 2018). However, reducing deposition below the critical loads does not necessarily mean that ecosystems will recover immediately, as there can be a time-lag before the chemical environment and the flora and fauna recover.

The air pollutants sulphur dioxide, nitrogen oxides and ammonia can contribute to acidification, and nitrogen oxides and ammonia can contribute to terrestrial eutrophication, both of which adversely affect semi-natural ecosystems. Exceeding the critical load for acid deposition is likely to cause low soil pH and high aluminium availability, making the habitat unsuitable for many species. Excess nitrogen as a nutrient can also affect species composition, for example, by triggering accelerated growth of some species at the expense of others.

Critical loads are thresholds above which significant harmful effects on sensitive habitats may occur, according to current levels of scientific understanding. Critical loads have been established separately for nutrient nitrogen (eutrophication effects) and for acidification. The pollutants causing acidification and eutrophication mainly arise as a result of emissions from burning fossil fuels in industry and road transport, and from livestock waste.
There are three main steps in the assessment of the area of sensitive habitat that exceeds critical loads:

Critical loads for acidity and nutrient nitrogen are calculated for 14 broad habitats (Table B5ai) considered sensitive to acidification and/or eutrophication. Different methods have been used to calculate critical loads, based either on empirical (observational or experimental) evidence or on mass-balance (input/output) data. To identify the area exceeding critical loads, deposition maps based on a 5 km x 5 km grid covering the UK are produced based on the sum of wet deposition, dry deposition and cloud deposition. These deposition data are overlain on maps of critical loads for each habitat to calculate critical load exceedances and the areas of habitat exceeded. Critical loads data for freshwaters (not reported here; see Trends Report 2021 are available for 1,752 sites selected across the UK where water samples have been collected and analysed – these data do not provide complete UK coverage. The critical loads data for all the other habitats listed are based on national-scale habitat distribution maps.

Table B5ai. The 14 habitats considered sensitive to acidification and/or eutrophication for which critical loads are calculated

The trends in critical loads exceedances use deposition maps based on the CBED Concentration Based Estimated Deposition (CBED) methodology. Since 2002 (2001 to 2003), the inclusion of nitric acid deposition in the assessment has increased the area of estimated critical load exceedance compared to earlier periods. The deposition values from 2003 (2002 to 2004) additionally include aerosol deposition of ammonium (NH4+), nitrates (NO3-), and sulphates (SO4-). In all years, the three-year average deposition is used to smooth substantial year-to-year variability.