B6. Pressure from invasive species

There are 3,248 non-native species in Great Britain, 2,016 of which are classified as established (reproducing in the wild). This indicator contains 194 non-native species that are considered to be exerting a negative impact on native biodiversity (47 freshwater species, 39 marine species and 108 terrestrial species). The majority (187) of these species are established; six* are long-term residents but not known to breed in the wild.

Over the period 1960 to 2020, invasive non-native species have become more prevalent in the countryside. Since 1960, the number of these species established in or along 10% or more of Great Britain’s land area or coastline has increased in the freshwater, marine (coastal) and terrestrial environments, thereby increasing the likely pressure on native biodiversity (Figure B6i).

Figure B6i. Number of invasive non-native species established in or along 10% or more of Great Britain’s land area or coastline, 1960 to 2020. 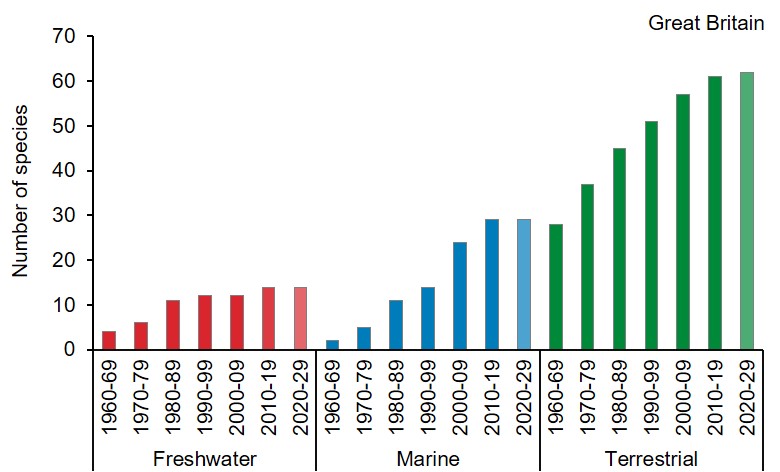 Comparing the latest period (2020 to 2029; so currently one year into this period) with the previous one (2010 to 2019), the number of invasive non-native species established in or along 10% or more of Great Britain’s land area or coastline has increased in terrestrial (from 61 to 62 species), and remained the same in freshwater (13 species) and marine environments (29 species).

Note: Analysis of the underlying long-term trends is carried out by the data providers. See Assessing Indicators. Short-term trends and latest-year changes are not assessed.

Under the CBD, the United Kingdom has an international obligation to address the impacts of invasive non-native species. In 2008, the UK government published the Invasive Non-native Species Framework Strategy for Great Britain.

The indicator and background charts are based on species distribution data available through the National Biodiversity Network (NBN), supplemented by expert knowledge and in house datasets of the Botanical Society of Britain and Ireland (BSBI), British Trust for Ornithology (BTO), UK Centre for Ecology & Hydrology (UKCEH), the Environment Agency (EA) and Marine Biological Association (MBA). Trends in the extent of invasive non-native species, as presented in Figure B6i and B6ii were derived through a two-stage process. The number of invasive non-native species included within the indicator was substantially expanded from the 49 species used in the indicator published in 2009 (Hill et al., 2009). An initial list was derived from the GB Non-native Species Information Portal (GB-NNSIP) (Roy et al., 2014) by selecting all non-native species within the database that are noted to have, or potentially have, a negative or strongly negative ecological effect, including all 49 species from the original indicator. This list was subsequently reviewed by experts. Species for which there was a high degree of uncertainty with respect to negative impact were removed and new species were added as deemed appropriate. The revised list in 2014 comprised of 179 species, but has been subsequently amended in 2015, 2017, 2018, 2019, 2020 and 2021 to now comprise of 194 species (see technical background document).

Invasive non-native species were categorised according to the extent of the land area or coastline of Great Britain in which they were found in the decades of 1960 to 1969, 1970 to 1979, 1980 to 1989, 1990 to 1999, 2000 to 2009, 2010 to 2019 and the present period of 2020 to 2029 (see Table B6i). The categorisation was achieved by combining assessment of modelled distributions based on data available from the NBN with expert opinion and the use of additional datasets where available (for more details see the technical background document).

Figure B6ii shows the number of species in each decade in each extent category listed in Table B6i.

Figure B6ii. Changes in the extent of invasive non-native species in freshwater, marine (coastal), and terrestrial environments of Great Britain, 1960 to 2020. 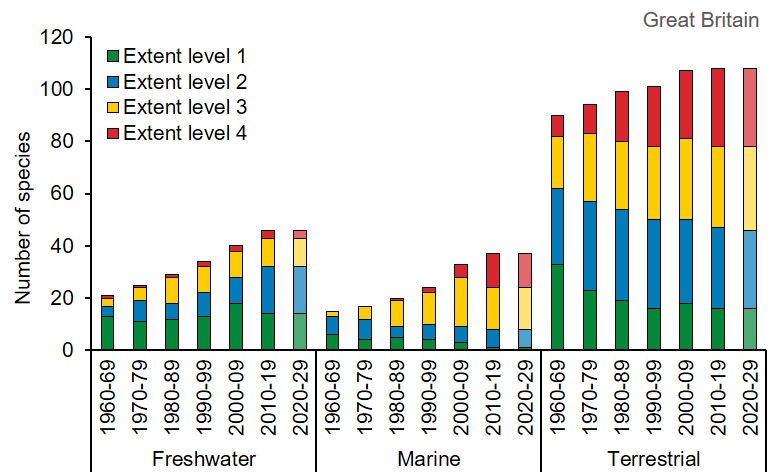 Extent levels are defined as follows:

The indicator is compiled from those invasive non-native species established in or along 10% or more of Great Britain’s land area or coastline (that is, extent categories three and four). There are limitations to this approach:

Target 9: By 2020, invasive alien species and pathways are identified and prioritized, priority species are controlled or eradicated, and measures are in place to manage pathways to prevent their introduction and establishment.