There has been a small decrease in the overall number of surface water bodies in the UK awarded high or good ecological status since the indicator was first prepared in 2009 and a similar decrease in the short term, between 2013 and 2018 (Figure B7i). In 2018, 35% of surface water bodies were assessed under the Water Framework Directive (WFD) as being in high or good status compared with 36% in 2009 and 37% in 2013. 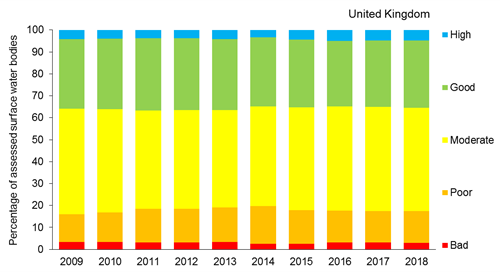 Note: The short-term assessment is based on a 3% rule of thumb. The base year for this assessment uses a 3-year average. See Assessing Indicators.

Download the Fiche and Datasheet from the JNCC Resource Hub