Experimental statistic – indicator under development: The UK biodiversity indicators project team would welcome feedback on the novel methods used in the development of this indicator. For example, should Figure C2i and/or Figure C2ii be the headline measure? Does this new indicator measure something readers feel should be measured?, and how well does it measure connectivity? As this is an experimental statistic, which is currently under development, it has not been assessed.

Connectivity is a measure of the relative ease with which typical species can move through the landscape between patches of habitat. Habitat loss and fragmentation can reduce the size of populations and hinder the movement of individuals between increasingly isolated populations, threatening their long-term viability.

This indicator illustrates changes in functional connectivity – the ability of species to move between resource patches – of 33 butterfly and 29 woodland bird species in the UK. The indicator is based on a measure of population synchrony, which is the level of correlation in time-series of population growth rates from different monitoring sites. Quantifying functional connectivity will allow more targeted landscape conservation management to help reduce the risk of species extinction. 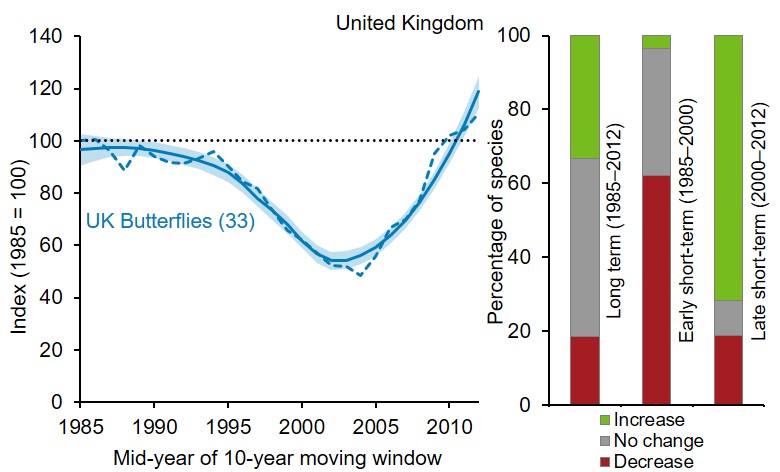 Figure C2ii. Functional connectivity of woodland birds in the UK, 1985 to 2012, using a 10-year moving window. 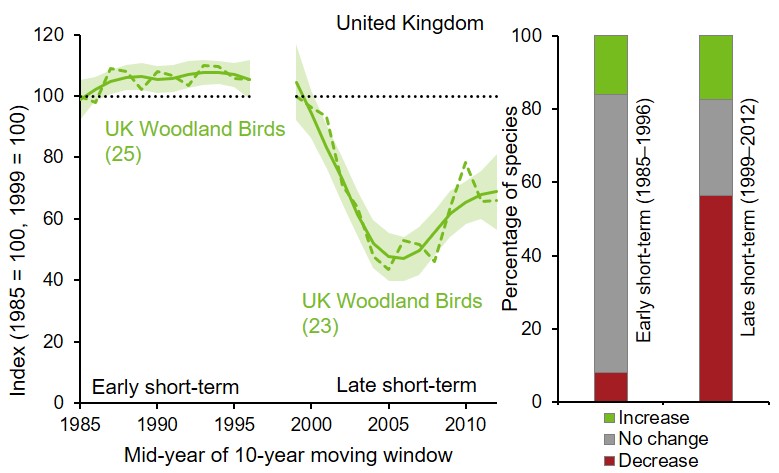 As this is an experimental statistic it has not been assessed. The UK biodiversity indicators project team would welcome views on whether Figure C2i and/or Figure C2ii should be the headline measure, together with comments on the value of this new indicator (i.e. is this measuring something readers feel should be measured?) and the quality of the new indicator (i.e. how well does it measure connectivity?).

Habitat loss and fragmentation was identified by the Millennium Ecosystem Assessment as one of five direct drivers of biodiversity loss. Habitat loss is a significant driver of biodiversity loss in the UK (Lawton et al., 2010). It results in fragmentation whereby habitats are separated into small, isolated patches (Fahrig, 2003). This inhibits individuals from dispersing across the landscape which is essential for metapopulation persistence, range shifts under climate change, and maintaining genetic diversity (Hanski, 1997; Watts & Handley, 2010). Quantifying functional connectivity — the ability of a focal species to move between resource patches (Oliver et al., 2017; Powney et al., 2011) — is therefore important in order to manage landscapes appropriately and reduce the risk of species extinction (Powney et al., 2012).

Habitat fragmentation and loss can be cumulative over time, but may be reversed through habitat management, restoration and recreation. Many of the habitats in the UK landscape are already highly fragmented. The effects of habitat fragmentation can be compounded by habitat management affecting source populations, as well as changes in land use between patches. The importance of these changes depends on the configuration of habitats (e.g. edge effects) and the ease with which species can move through the intervening landscape (permeability).

Functional connectivity is determined by the number of individuals leaving patches (e.g. emigration often when local abundance is high), the intrinsic dispersal capability of individuals, and the structure of the landscape facilitating or hindering movement (Figure C2iii). Certain methods to measure functional connectivity, such as mark-release-recapture studies or landscape genetics are expensive, time consuming and can only be conducted over small spatial scales. Larger-scale (national) indicators therefore have tended to focus on structural metrics based on land cover combined with expert opinion on species’ habitat associations and movement capacity (Watts & Handley, 2010). While useful, these approaches are limited by the frequency by which land cover data are updated and by substantial uncertainty in using expert opinion to estimate species’ movement capabilities across land cover types. This indicator uses a data-derived method based on widely available, annually updated species monitoring data – which gives a ‘species-eye-view’ (empirically derived) measure of functional connectivity.

The functional connectivity indicator is based on a measure of population synchrony, the level of correlation in time-series of annual population growth rates between different monitoring sites. Population synchrony is known to be influenced by distance between sites, habitat similarity, shared climate and position in geographic range (Powney et al., 2011, 2012). After accounting for these factors, research has shown population synchrony to be an effective measure of functional connectivity, responsive to the structure of land cover between sites (Powney et al., 2011, 2012), and reflecting actual movements of individuals from independent mark-release-recapture data (Oliver et al., 2017). Additional evidence which analysed over 60 UK birds and butterflies found that mobile and more abundant species have higher levels of population synchrony (Morrison et al., in prep). In this indicator, data from the UK Butterfly Monitoring Scheme (UKBMS) and British Trust for Ornithology (BTO) are used, which comprise spatial and temporally replicated standardised population monitoring data (see Figure C2iv for an overview of the locations of these sites). Two BTO datasets are used: the Common Birds Census (CBC) which ceased in 2000 and the Breeding Bird Survey (BBS) which began in 1994 and continues today. Because the number and identity of monitoring sites varies through time, an approach based on mixed effects models is used to account for this variation while estimating a temporal trend in functional connectivity.

Population synchrony in growth rates (i.e. interannual population changes; following Powney et al., 2010) was calculated for all pair-wise monitoring site combinations, using a 10-year moving window from 1980 to 2016 for the UKBMS dataset, 1980 to 2000 for the CBC dataset, and 1994 to 2016 for the BBS dataset. A mixed effects model was fitted, with population synchrony as the response variable, and the mid-year of each moving window included as a fixed categorical effect. To account for other known drivers of population synchrony, distance between sites, habitat similarity index, and mean northing were included as predictors in the model (Powney et al., 2011). Site pair ID and species were included as random intercepts. Coefficients for each year were extracted and used as the measure of functional connectivity along with standard errors to reflect uncertainty in the estimate. 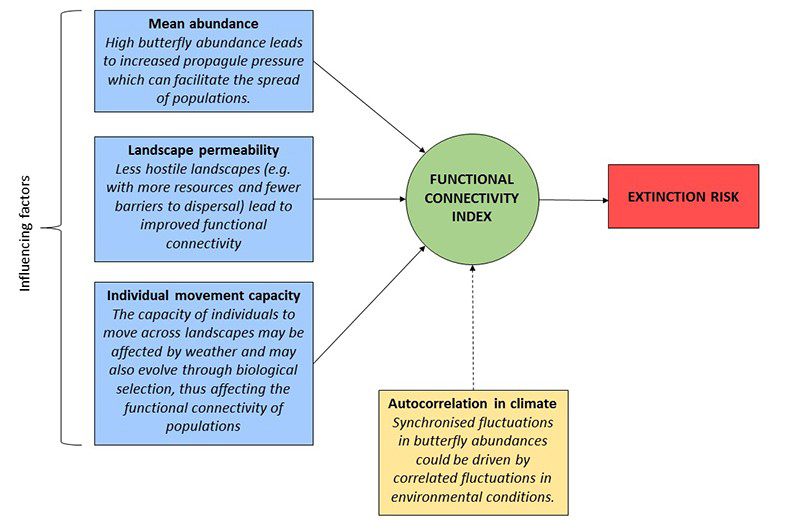 To determine how many butterfly species were changing in functional connectivity over time, three periods of change were investigated: two short-term trends; early (1985 and 2000) and late (2000 and 2012), and one long-term trend (1985 and 2012). For birds, two time periods were chosen: early short-term using the CBC dataset (1985 to 1996) and late short-term using the BBS dataset (1999 to 2012). These time periods were chosen to ensure there was no overlap in the 10-year moving window (i.e. they represent independent input data). For each time period comparison, and for each species, coefficients and their uncertainty were extracted from the mixed effects model to determine whether connectivity had significantly increased or decreased, or there had been no significant change between the two comparison years (Figure C2i and C2ii).

It is important that the measure of functional connectivity reflects the three main components determining movement between sites (Figure C2iii) and not confounding effects. Two possible confounding effects could be a) a temporal trend in spatial autocorrelation in climate over time, or b) increasing variance in climate over time. To test for a), Moran’s I was calculated for four climatic variables: mean temperature and rainfall for each season (spring, summer autumn, winter). Linear and quadratic regression models were fitted for each variable against year. These models showed no significant trends suggesting no evidence for changes in spatial autocorrelation in climate over time. To test for b), the variation in seasonal mean temperature and total precipitation were compared between 1985 to 2000 and 2000 to 2012. Analysis using an F-test revealed no significant changes in variance between the two time periods.

1. Estimated quality of intervening landscape between sites is positively related to population synchrony (Speckled wood butterfly at scales of up to 100km, Powney et al., 2011)

2. Distance along woodland edges is a better predictor of movement than Euclidean distance ­– a similar result was found for both population synchrony and mark-release-capture (Ringlet butterfly; Powney et al., 2012)

4. Species that are mobile and more abundant have higher levels of population synchrony and these results are robust to an additional effect of species position in their geographic range (61 butterflies and birds; Morrison et al., in prep).

Until 2013, this indicator was based on an analysis of the change in habitat connectivity for selected broad habitats in the wider countryside. The indicator methodology was developed by Forest Research in collaboration with the Centre for Ecology & Hydrology, using Countryside Survey data collected consistently from 591 Countryside Survey 1 km2 sample squares in Great Britain in 1990, 1998 and 2007. The results of this work provided a significant step forward in understanding and describing habitat fragmentation and connectivity, but unfortunately it has not been possible to update this indicator since the last Countryside Survey was carried out in 2007.

Given the age of the most recent data and the lack of any future opportunities to source updates in a consistent way, the UK Biodiversity Indicators Steering Group decided to reclassify this indicator as ‘under development’ and look at new options for a headline measure. Key messages from the previous indicator update are presented here; the previous indicator can be viewed in full via The National Archives.

The indicator presented the change in the degree of habitat connectivity in Great Britain between 1990 and 2007, for two broad habitats (see Figure C2v):

The indicator provided a measure of functional connectivity of these two habitats in the wider landscape (i.e. the relative likelihood of species typical of the habitat being able to move within and between habitat patches). The calculations took into account the area of habitat patches, how isolated they are, which habitats are next to each other, and the ease with which species are able to move through the surrounding landscape. The influence of habitat quality on species was only partially covered by this indicator.

The measure required further analysis to better explain the causes of the changes in connectivity and, as a result, the information available was insufficient for an assessment of change to be made. The indicator did however show a non-significant declining trend in the connectivity of broad-leaved, mixed and yew woodland in Great Britain, and an increasing trend in the connectivity of neutral grassland. The trend for neutral grassland was significant between 1990 and 2007 but not in the short term between 1998 and 2007 (Figure C2v).

Figure C2v. Change in habitat connectivity for selected broad habitats in the wider countryside, 1990 to 2007. 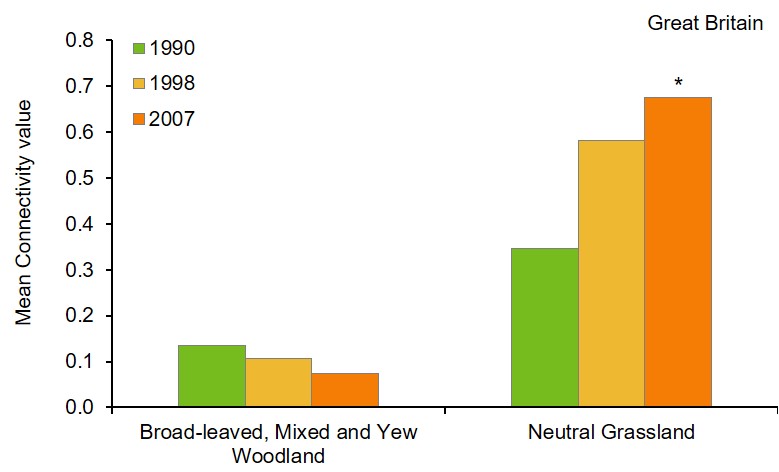 Strategic Goal D. Enhance the benefits to all from biodiversity and ecosystem services.