This indicator should be read in conjunction with C4a which provides data on those species for which abundance data are available.

Since the 2019 publication, the Biological Records Centre has received additional data for Ants, Bees, Wasps, Spiders and Dragonflies. These data are included in this year’s indicator.

Official lists of priority species have been published for each UK country. There are 2,890 species on the combined list; actions to conserve them are included within the respective countries’ biodiversity or environment strategies.

Between 1970 and 2017, the index of distribution of priority species in the UK decreased, with a higher proportion of species decreasing in distribution than increasing. The long-term trend is assessed as a decline of 28%.

The index was 3% higher in 2017 than in 2012, with 45% of species showing an increase and 38% showing a decline. However, this short-term increase was not significant, and therefore the short-term assessment is stable. 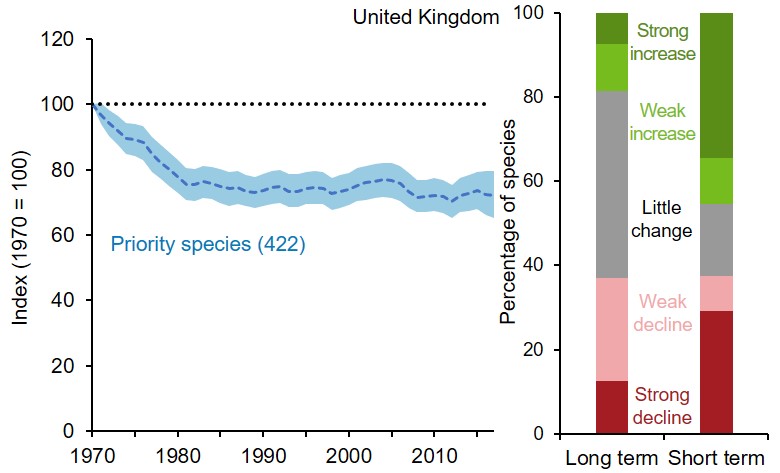 Assessment of change in distribution of priority species in the UK

Note: Analysis of the underlying trends is undertaken by the data providers.

Priority species are defined as those appearing on one or more of the biodiversity lists of each UK country (Natural Environmental and Rural Communities Act 2006 - Section 41 (England); Environment (Wales) Act 2016 section 7, Northern Ireland Priority Species List, Scottish Biodiversity List). The combined list contains 2,890 species in total. The priority species were highlighted as being of conservation concern for a variety of reasons, including rapid decline in some of their populations. Actions to conserve these priority species are included within the respective countries’ biodiversity or environment strategies.

Of the 2,890 species on the combined priority species list, the 422 for which robust quantitative time-series of the proportion of occupied sites are available are included in the indicator. These 422 species include bees, wasps and ants (93); bryophytes and lichens (120); moths (117); and other taxa (92). The other taxa include a number of insect groups, molluscs and spiders. The species have not been selected as a representative sample of priority species and they cover only a limited range of taxonomic groups. The measure is therefore not fully representative of species in the wider countryside. See the technical background document for more detail.

The index of distribution of priority species in the UK fell by more than 20% between 1970 and 1981; this was then followed by a relatively stable period until 2010 when it dipped to its lowest point in 2012, before showing an increase between 2012 and 2017. Occupancy of priority species was assessed as declining between 1970 and 2017. The index was 28% lower in 2017 than in 1970, this is considered a significant change. The indicator increased by 3% between 2012 and 2017 and therefore, it was assessed as stable when taking into account the 90% credibility interval. Uncertainty in the species-specific annual occupancy estimates are incorporated into the overall indicator; details of how this was done are included in the technical background document.

Priorities for species and habitat conservation are set at a country level through country biodiversity or environment strategies. Each country has an identified list of priority species, which are of high conservation concern due, for example, to restricted range or population declines. The indicator therefore includes a substantial number of species that, by definition, are becoming less widespread.

Measures of distribution are less sensitive to change than measures of abundance (see indicator C4a). Nonetheless, if a threatened species that has been declining starts to recover, its distribution should stabilise, and may start to increase. If the proportion of species in the indicator that are stable or increasing grows, the indicator will start to decline less steeply. If the proportion declines, it will fall more steeply. Success can therefore be judged by reference to trends in both indicators C4a and C4b, as well as other information on other priority species for which there are insufficient data for inclusion in the indicator.

The measure is a composite indicator of 422 species from 20 taxonomic groups (8 of the 29 groups originally modelled did not contain any species with sufficient data to be included in the final analysis), see the technical background document for a detailed breakdown of the species and groups in the indicator. The priority species identified in each of the 4 UK countries were highlighted as being of conservation concern for a variety of reasons, including their scarcity, their iconic nature or a rapid decline in their population. They are not representative of wider species in general. They do however include a range of taxonomic groups and will respond to the range of environmental pressures that biodiversity policy aims to address, including land use change, climate change, invasive species and pollution. The short-term assessment of change can be used to assess the impact of recent conservation efforts and policy aimed at halting and reversing species declines. However, natural fluctuations (particularly in invertebrate populations) and short-term response to weather may have a strong influence on the short-term assessment.

Regardless of advances in statistical techniques and the increase in the number of biological records collected, there are likely to be species on the priority lists for which little monitoring or occurrence data is available. Reasons for this include rarity, difficulty of detection, or those for which monitoring methods are unreliable or unavailable. In order for the indicator to be representative of priority species, a method of assessing the changing status of these remaining data poor species would need to be considered.

The Bayesian occupancy approach enables an estimation of species occurrence even though the data used in this indicator were collected without a standardised survey design (van Strien et al., 2013; Isaac et al., 2014a and b). For each species, records were extracted at the 1km grid square scale with records on different days being treated separately, and an annual time-series of the proportion of sites occupied was calculated. Each species-specific time series was scaled so the first value in 1970 was set to 100. The annual index was estimated as the arithmetic mean of the scaled species-specific occupancy estimates. Each species was given equal weighting within the indicator. Uncertainty in the species-specific annual occupancy estimates is represented by the 90% credible intervals. See the technical background document for further detail on production of the indicator.

Species were grouped into one of 5 categories based on both their short-term (over the most recent 5 years of data) and long-term (all years) mean annual change in occupancy. The threshold values for each category were based on those of the wild bird indicator. See the technical background document on the Bayesian indicator development for further detail on the calculation of the species-specific trends.

The trends of the taxonomic groups included within a multi-species indicator are often obscured by its composite nature. Indicator lines have been generated for a number of sub groups using the same method so that the trends for these groups can be seen more clearly (see Figure C4bii). The bees, wasps and ants group experienced an overall decline, with an index value in 2018, 82% of that in 1980. These are counterbalanced by increases in bryophytes and lichens, which had an index value of 124 in 2015. The moths have undergone the most dramatic decline with an index value in the final year 59% of the value in 1970. Similar strong declines in moths were noted in C4a. The underpinning causes of this decrease are not completely understood.

Since 2019, data updates to the Biological Records Centre database were received for 5 taxonomic groups: Ants, Bees, Wasps, Spiders and Dragonflies.

Figure C4bii. Change in distribution of priority species, by taxonomic group, 1970 to 2017. 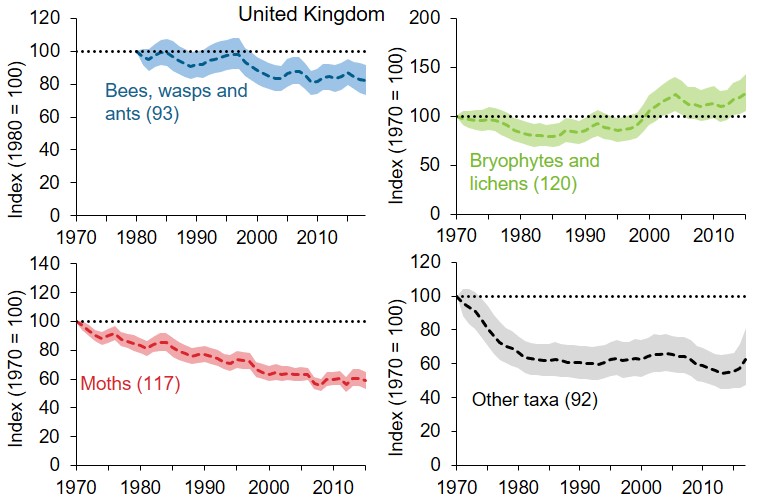 The assessment given here is based on the indicators published in 2018 using data up to 2015.

The priority species indicator currently comprises of 2 measures; C4a based on abundance data and this indicator (C4b) based on distribution data. The assessments are made separately for these 2 indicators, which can result in potentially different messages. Ideally, these would be combined into a single assessment for priority species, however such a combined indicator needs to address challenges about differences in the data types that contribute to C4a and C4b. Simply combining the species trends would assume equivalence across the 2 datatypes, i.e. that a 10% change in abundance is equivalent to a 10% change in distribution. This has, to date, been deemed an unreasonable assumption to make. Furthermore, combining change from different datatypes leads to a lack of clarity around what the indicator is actually measuring when using magnitude of change.

The UK Centre for Ecology & Hydrology have proposed a technique to produce a combined evaluation of priority species, using both abundance and distribution data. The key development is that rather than assessing the indicator based on magnitude of change, the assessment is based on the balance of increasing verses decreasing species. This is consistent with existing indicators, in that the assessment is a statement of confidence in whether the overall trend line has increased, decreased or showed no overall change. It also sidesteps the challenges of combining different data types by only assuming that the confidence with which a species is assigned an increasing or decreasing trend can be compared across data types (see the technical background document for further details). As this technique is currently being refined, it has only been used to produce a measure of the combined long-term change in the 2 priority species indicators (Figure C4biii).

Figure C4biii. Combined long-term change in the relative abundance and distribution of priority species in the UK, 1970 to 2015. 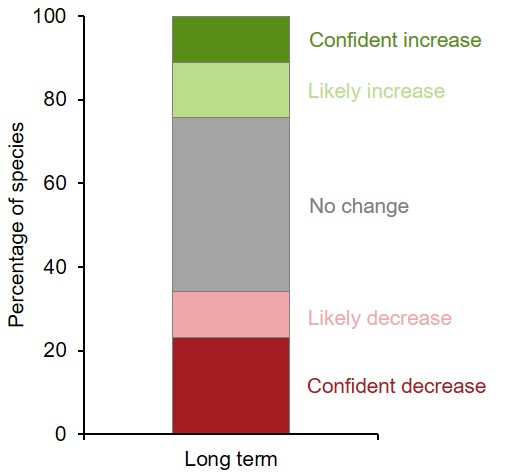 Of the 929 priority species included in the 2018 update of C4a and C4b, 225 (24%) have increased, 317 (34%) have decreased and 387 (42%) have shown no significant change in either abundance or distribution between 1970 and 2015. Overall, the long-term trend for the combined measure of priority species abundance and distribution in the UK is declining. 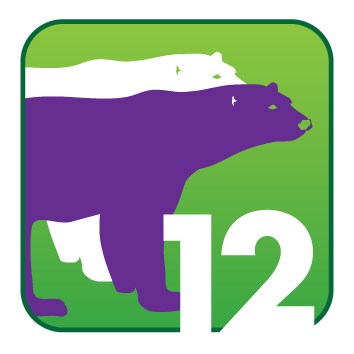 Target 12:By 2020, the extinction of known threatened species has been prevented and their conservation status, particularly of those most in decline, has been improved and sustained. 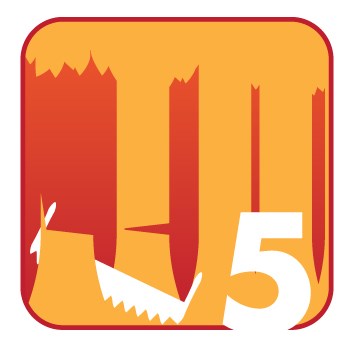 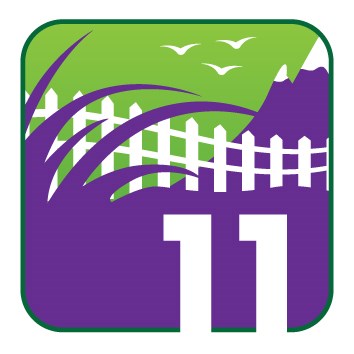