This indicator shows changes in the relative abundance of 11 of the UK’s 17 breeding bat species, based on data from transect surveys, roost counts and counts at hibernation sites. Whilst 11 species are included there are only 10 trends, as an aggregate trend is used for the whiskered bat (Myotis mystacinus) and Brandt’s bat (Myotis brandtii); these two species are difficult to distinguish between in the field. Bat species make up a third of the UK’s mammal fauna and occur in most lowland habitats across the UK.

The bat index is a composite of 10 trends (11 species, two of which are combined in a single trend). Since 1999, six of the trends included in the index have increased and four have shown little or no change. The UK’s rarer and more specialised bat species are not included in the index due to difficulties monitoring these species.

The increase in the index is underpinned by large statistically significant increases in populations of three species, greater horseshoe bat, lesser horseshoe bat and common pipistrelle. These increases indicate that some bat species are starting to recover after what are believed to have been major population declines during the 20th century. 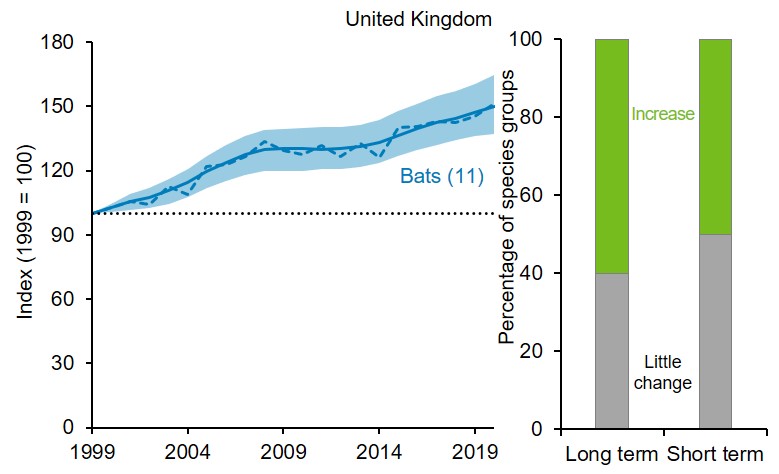 The smoothed bat index increased every year between the 1999 baseline year and 2009, it was then relatively stable between 2009 and 2013, before increasing again between 2013 and 2019 (see below for an explanation of the assessment). However, the composite indicator masks variation between the species that contribute to it. The long-term increase in the indicator is primarily driven by strong increases in three species; greater horseshoe bat, lesser horseshoe bat and common pipistrelle and between 1999 and 2019, the combined survey trend for these species increased by 156%, 117% and 97% respectively. Three other species showed weaker increases over the same period, and the remaining four species groups showed little change. In the short term, between 2014 and 2019, five species have increased significantly and the remaining species groups show no significant short-term change. No species show a decline in either the long or short term, however it is not possible to produce separate trends for whiskered bat and Brandt’s bat, as they cannot be reliably distinguished between in the field. It is therefore possible that an increase in one species could mask a decline in the other. It is also important to note that the UK’s rarer and more specialised bat species are not included in the index due to difficulties monitoring these species.

Note: Long-term and short-term assessments are made on the basis of smoothed trends to the penultimate year (2019) by the data providers. This is because the most recent smoothed data point (2020) is likely to change in next year’s update when additional data are included for 2021. The latest year change is based on unsmoothed data.

Bat populations utilise a range of habitats across the landscape and are sensitive to pressures in the urban, suburban and rural environment. All bats and their roosts are protected by domestic legislation. The UK is a signatory to the EUROBATs agreement, set up under the Convention on Migratory Species, with the intention of conserving all European bat populations. The wider relevance of bats as biodiversity indicators is presented in Jones et al. (2009).

The species used in this index (Table C8i) occur throughout a variety of landscapes including urban areas, farmland, woodland, and river/lake systems. All bats in the UK feed at night and prey on insects. To thrive, they require adequate roosting opportunities (particularly for breeding and hibernating), foraging habitat and connected landscape features, such as hedgerows and tree lines, which assist them in commuting between roost sites and feeding locations.

Key pressures on bats, including landscape change, agricultural intensification, development, habitat fragmentation, are also relevant to many other wildlife groups. Bats are believed to have experienced major declines throughout Western Europe during the 20th century, which have been attributed to persecution, agricultural intensification, habitat and roost loss, remedial timber treatment and declines of their insect prey. Evidence of these declines (synthesised in Haysom et al., 2010) is fragmented as during this period few data were collected in a systematic way. Evidence includes:

The bat index and long-term assessment reflect changes in bat populations since 1999 and indicate that more recently some UK bat populations are beginning to recover. This recovery is in line with a prototype European indicator of trends in bat populations, developed from counts at hibernation sites in nine European countries including the UK (Haysom et al., 2014). The greatest weight of evidence suggests that two factors have had a positive impact on bat populations in the UK: a reduction in human disturbance since the introduction of strict legal protection and a milder climate (Burns et al., 2016), in particular over winter and spring, which has been shown to benefit horseshoe bat species (Battersby, 2005; Froidevaux et al., 2017; Schofield, 2008). The impact of climate change on other UK bat species is less clear. Bats have also benefited from direct conservation action and public education (Mitchell-Jones 1993; Haysom et al., 2010), but remain vulnerable to pressures such as landscape change, climate change, development and emerging threats such as new building practices, wind turbines, and light pollution (Browning et al., 2021; Haysom et al., 2010; Kunz et al., 2007; Rebelo et al., 2010; Stone et al., 2009, 2012).

The National Bat Monitoring Programme was established in 1996, with the first surveys undertaken in 1997. It currently delivers trends for 11 of the UK’s 17 breeding bat species (two of which are combined) and has deployed over 4,700 volunteers to record observations at 7,095 sites (see Figure C8ii). 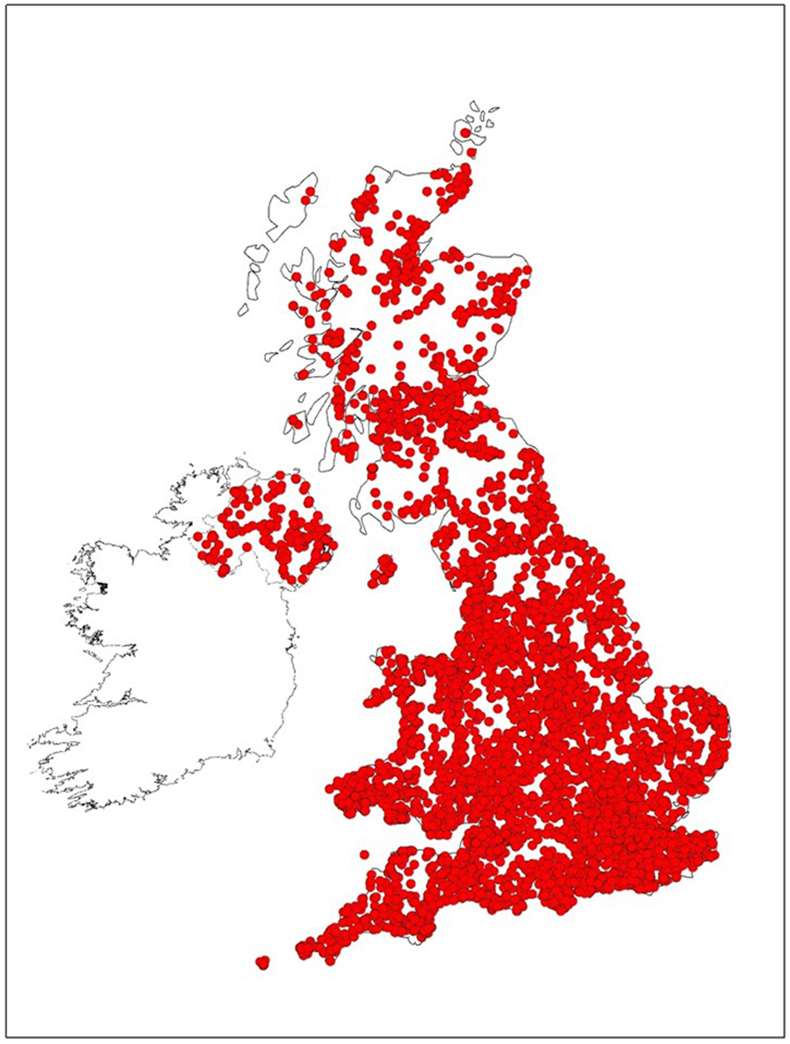 This indicator shows changes in the relative abundance of 11 of the UK’s 17 breeding bat species: brown long-eared bat, common pipistrelle, Daubenton's bat, greater horseshoe bat, lesser horseshoe bat, Natterer’s bat, noctule, serotine, soprano pipistrelle and whiskered/Brandt’s bat (the latter two species cannot be distinguished between during monitoring surveys and so are treated as one species group). It is compiled by the Bat Conservation Trust using data collected annually from the National Bat Monitoring Programme (NBMP). Surveys for these species include summer roost counts, counts at hibernation sites and visual and/or acoustic observations made along predetermined transects. Most species are surveyed by two different survey methods, both of which are included in the index apart from summer roost count data for common and soprano pipistrelle. Pipistrelle species’ frequent ‘roost switching’ causes a negative bias in trends calculated from summer roost counts, so these data are omitted (Dambly et al. 2021).

For each species, Generalised Additive Modelling (GAM) is used to calculate the trends in numbers over time (Fewster et al., 2000). The models include terms for factors that can influence the apparent population averages (for example, bat detector model, temperature, and so on), so their effect can be taken into account. The GAM models produce smoothed trends which are more robust against random variation between years. For easier interpretation the means are then converted to an index that is set to 100 for the selected baseline year of data. The species indices are revised when new data become available or when improved modelling methods are developed and applied retrospectively to data from earlier years. As such, indices published in previous years are not strictly comparable to the current index. To generate the composite bat indicator and confidence intervals, each species has been given equal weighting, and the annual index figure is the geometric mean in that year (Figure C8i). Confidence intervals are relatively wide due to the high variability inherent in bat monitoring data and the rarity of several species. Long- and short-term assessments are run to the penultimate year of the trend as the most recent year’s smoothed data point is likely to change as future years of data are added. The latest year change is based on unsmoothed data. The survey methods and statistical analysis used by the NBMP to produce individual species trends are described in Barlow et al. (2015).

Table C8i. Long-term and short-term percentage change in the species trends used in the bat indicator

* Denotes a statistically significant change (based on smoothed data).
Note: To better capture patterns in the data, long-term and short-term assessments are made on the basis of smoothed data, with analysis of the underlying trend undertaken by Bat Conservation Trust. All 11 species are protected through Annex IV of the Habitats Directive. Greater horseshoe bat and lesser horseshoe bat are also listed on Annex II of the Directive – leading to Special Areas of Conservation being designated for these species.

Ransome, R.D. (1989). Population changes of Greater horseshoe bats studied near Bristol over the past twenty-six years. Biological Journal of the Linnean Society, 38, 71 to 82.