Genetic diversity is an important component of biological diversity. Rare and native breeds of farm animals are part of our cultural heritage, are often associated with traditional land management required to conserve important habitats, and may have genetic traits of value to future agriculture.

This indicator shows the change in the average effective population sizes for breeds of goats, pigs, horses, sheep and cattle classified by the UK Farm Animal Genetic Resources Committee as Native Breeds at Risk (NBAR).

The average effective population size of the native breeds at risk included in this indicator:

The average effective population sizes calculated between 2000 and 2019 for the native breeds at risk of goats, pigs, horses, sheep and cattle were each above 50, the figure set by the United Nations Food and Agriculture Organisation as a threshold for concern. However, in 2019, of the Native Breeds at Risk, 2 breeds of goat (Saanen and Toggenburg), 4 breeds of horse (Cleveland Bay Horse, Eriskay Pony, Hackney, and Suffolk Punch), and one breed of cattle (Vaynol), had a Ne less than or equal to 50. No breeds of sheep or pig had effective population sizes below the threshold in 2019.

There has been no reported UK extinction of any breeds of goats, pigs, horses, sheep or cattle since 1973. 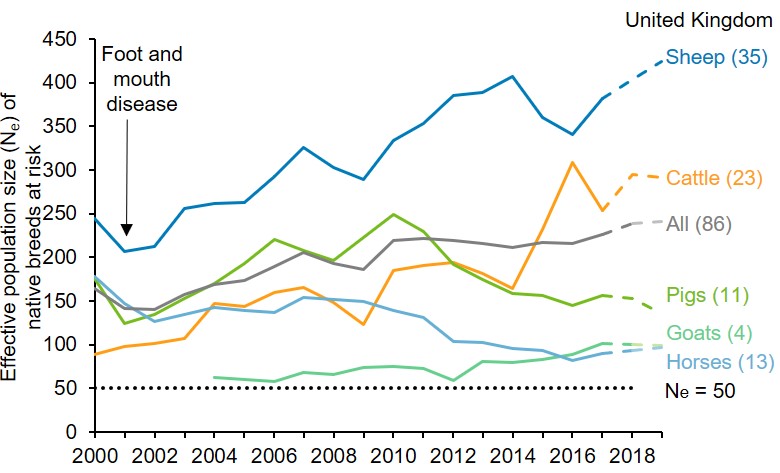 Note: Long and short-term assessments are based on a 5% rule of thumb. Where possible, the base years for these assessments use a 3-year average. See Assessing Indicators.

The indicator shows the change in the average effective population sizes (Ne) for breeds of goats, pigs, horses, sheep and cattle classified by the UK Farm Animal Genetic Resources Committee as Native Breeds at Risk (NBAR). The UK Farm Animal Genetic Resources (FAnGR) Committee breed inventory was first published in 2014 with information for pigs, goats and horses, and was expanded in 2015 to include sheep and cattle.

For goats and pigs, data to calculate effective population size is available for all years for all breeds included in the indicator (from 2004 to 2019 for 4 goat breeds, and from 2000 to 2019 for 11 pig breeds). However, for horses, sheep and cattle, the number of breeds contributing to the indicator increases over time as more data becomes available (for details see the technical document).

Data in the inventory is sourced from individual breed society records. As all pedigree animals need to be registered with their respective society to receive their pedigree certificate, the breed society records are comprehensive. To maximise efficiency in data collection, central database suppliers who maintain the breed society databases supply the data to the Defra Farm Animal Genetic Resources team. Breed societies have given their permission for these companies to supply the data every year for this exercise. In addition, data for additional breeds is collected from individual breed societies on a 3-yearly basis, the latest was in October 2018. The most recent triennial exercise collected data for two thirds of the breeds for 2015, 2016 and 2017, so for some breeds there are missing values for these 3 years and for 2018 and 2019.  It is anticipated that the next triennial exercise will be in late 2021, and will collect new data for the years 2018, 2019 and 2020.

The assessment of change for the indicator was made by applying a 5% rule of thumb. The arithmetic mean of the first 3 years of the data series for each species was compared with the last point to determine the assessment for the long-term trend, and an arithmetic mean of the year 5 years back in the time series and the year either side calculated to compare with the last point to assess the short-term trend. Five per cent was chosen to recognise the human element in the choice of which sires breed with which dams (which is not random for non-feral breeds), and because this level has already been chosen by the Rare Breeds Survival Trust to identify changes from the previous year’s Watchlist publication. It should be noted that single year variations in the measures are not hugely meaningful, due to the human element in which sires breed with which dams.

The United Nations Food and Agriculture Organisation (FAO) recommends a minimum effective population size (Ne) of at least 50 individuals to reduce the rate of inbreeding to less than 1% and ensure the long-term survival of a breed. Figure C9ai shows that, on average, all 5 species have Ne greater than 50. However, examination of the data for the individual breeds reveals (Figure C9aii) that there are a small number of breeds with Ne less than or equal to 50 in many years. The breeds which are represented in Figure C9aii may change from year to year; see the downloadable datasheet for details. In 2019, 2 breeds of goat (Saanen and Toggenburg), 4 breeds of horse (Cleveland Bay Horse, Eriskay Pony, Hackney, and Suffolk Punch), and one breed of cattle (Vaynol), had a Ne less than or equal to 50. No breeds of sheep or pig had effective population sizes below the threshold in 2019. 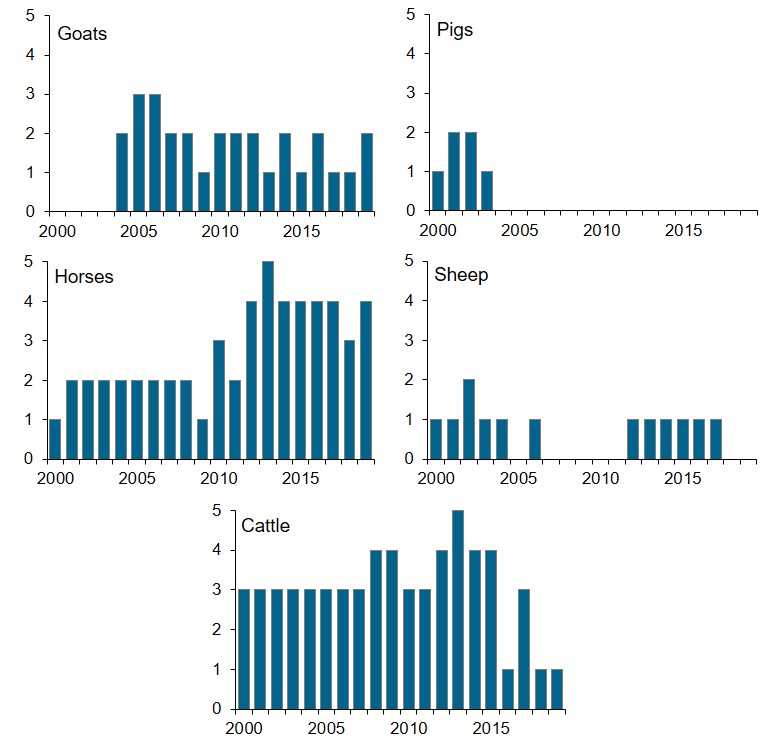 Note: Based on data in the UK Farm Animal Genetic Resources Breed Inventory published on 7 May 2020.

Eight of the 13 horse breeds in the indicator have had declines in Ne, showing a long-term decrease, however more recently in the short-term the Ne has changed little.  Due to a clerical error, Shetland pony was previously classed incorrectly as a NBAR and has been removed in the 2019 inventory update. This error first appeared in the 2014 inventory which was published in 2015 and therefore this indicator is not directly comparable with previous publications. The Eriskay pony has had an effective population size of less than 50 each year since 2000 with the Ne for 2016 and 2018 being 4. Since 2001 when it joined the indicator, the Suffolk Punch has had an Ne of less than 50 every year but one (2009, when the value was 53). The Ne for New Forest Pony has declined from 716 in 2000 to 289 in 2019. Since 2002 when it joined the indicator, the Cleveland bay horse has had an Ne of 50 or less than for 9 of the 18 years it has been included, with the lowest effective population size being 31 in 2016.  The Ne for the Dales pony increased from 110 in 2000 to 122 in 2019, an increase of 15%. The Ne for British Percheron/Percheron, for which there are only 6 years’ worth of data (2012 to 2017), has an effective population size range of between 18 and 22.

As with pigs, there was a dip in numbers in 2001 as a result of foot and mouth disease. The time series for these breeds varies in length; of the 26 breeds with at least 10 years of data, 20 breeds have had an increase in Ne (for example, Boreray, Shropshire, Kerry Hill, and Leicester Longwool) and 5 a decrease (Black Welsh Mountain, Cotswold, Manx Loaghtan, Wensleydale and Whitefaced Woodland), with one breed remaining stable (Border Leicester a 2% increase). There has been a strong increase in the Ne for Boreray, from a low of 15 in 2001 to 186 in 2019. There are 6 years of data (2012 to 2017) for Cambridge, but Ne is low (ranging between 34 and 42) for all 6 years.

As with sheep, the time series for the breeds contributing to the indicator varies in length. Of the 16 breeds with at least 10 years of data, 14 have increased (for example, Belted Galloway, Lincoln Red including Lincoln Red (Original), and Luing) and 2 breeds have decreased (Galloway and Gloucester).  The effective population size of Vaynol has been in single figures for 9 of the 12 years it has been included in the indicator in since 2008 apart from 2016 where it was 10, 2017 where it was 13, and 2019 where it is 15. The effective population size of Chillingham for which there are only 3 years data (2012 to 2014) is 3 for each of those years.

The UK is home to some of the richest and most diverse farm animal genetic resources in the world, with approximately 700 breeds including cattle, sheep, goats, pigs, horses and ponies and poultry; the UK contains more than 9% of the total of global livestock breeds. There are some 200 native breeds according to the definition adopted by the UK Farm Animal Genetic Resources (FAnGR) Committee, the majority of which are considered to be “at risk”. A list of known breeds in the UK is given in Appendix 2 of the 2012 UK Country Report on Farm Animal Genetic Resources and in the Annex of the 2010 Poultry in the UK report. Defra and its FAnGR Committee monitor the status of UK breeds to determine if they are native, exotic, at risk or not; and ensure that eligible species/breeds:

Many of the UK’s habitats that are now valued for their biodiversity were created by, or for, farm animals. These habitats include various types of upland and lowland grasslands and heathlands, hay meadows and pasture-woodlands. Other habitats, such as sand dunes, salt marshes and even woodlands may also benefit from light grazing. If these habitats are not grazed they may lose their special conservation value as they become invaded and eventually dominated by scrub and trees through the process of ecological succession.

Although it is not possible to measure the genetic variation in all traits of interest, the average rate of loss in genetic variation can be estimated, since this rate can be described by calculating the ‘effective population size’.

The UK Farm Animal Genetic Resources (FAnGR) Breed Inventory is an electronic monitoring system. It was first published by Defra in July 2014 and updated annually since then. The monitoring system contains data on the status and trends in the domestic pig, goat, horse, sheep and cattle farm animal genetic resources with continuous data from 2000 to 2019 for around 100 breeds which are present in the UK. More recently, the electronic monitoring system for FAnGR is now starting to collect more information and more regularly, which should lead to an improvement with the data provided in non-triennial years.

Defra and the Farm Animal Genetic Resources Committee will continue to monitor populations of UK livestock breeds regularly; the list of Breeds considered to be at Risk is kept under annual review using the monitoring data collected, with Breeds at risk potentially eligible for protection in an outbreak of an exotic disease (within the constraints of controlling the disease).

The Rare Breeds Survival Trust (RBST) works to conserve and protect the United Kingdom’s rare native breeds of farm animals from extinction as a resource for future generations and for the benefit of agriculture. Between 1900 and 1973, the United Kingdom lost 26 of its native breeds. This was caused by changing farming methods and a much more intensive approach to food production. Since the formation of the Trust in 1973 no other native livestock breed has become extinct in the UK.

The RBST publishes an annual watchlist, which highlights changes in breed population trends. The watchlist is divided into 6 categories: Critical; Endangered; Vulnerable; At Risk; Minority; and Other Native Breeds. Breeds are placed into categories based on species and the total number of registered breeding females in the United Kingdom. Population genetic factors (such as inbreeding and genetic erosion) and current trends in breed density and distribution (geographical concentration in a small area) can mean a breed will be vulnerable to disease outbreaks. These factors are also included in making assessments of status.

Target 13: By 2020, the genetic diversity of cultivated plants and farmed and domesticated animals and of wild relatives, including other socio-economically as well as culturally valuable species, is maintained, and strategies have been developed and implemented for minimizing genetic erosion and safeguarding their genetic diversity.