Forests are a large store of carbon and also act as an active carbon ‘sink’, removing carbon dioxide (CO2), a greenhouse gas, from the atmosphere and storing it as carbon in living biomass, leaf litter and forest soil. This sequestration of CO2 is an essential ecosystem service. This indicator shows the cumulative net removal of greenhouse gases from the atmosphere by UK forests since 1990. It is split between type of woodland (conifer and broadleaf). Showing greenhouse gas removals by type of woodland is interesting from a biodiversity perspective as it allows a clearer presentation of the contribution made to greenhouse gas removals by broadleaf woodland, most of which constitutes priority habitat.

It is estimated that since 1990, forests in the UK have (cumulatively) removed the equivalent of 525 million tonnes of carbon dioxide (Mt C02e) from the atmosphere (Figure D1bi). In 2018, UK forests are estimated to have removed 18 Mt CO2e (Figure D1bii).

The proportion of greenhouse gases removed from the atmosphere by broadleaf woodland has increased since the time series began, accounting for 50% (9.0 Mt CO2e) of the estimated annual removals in 2018 compared to 37% (5.6 Mt CO2e) of removals in 1990 (Figure D1bii). 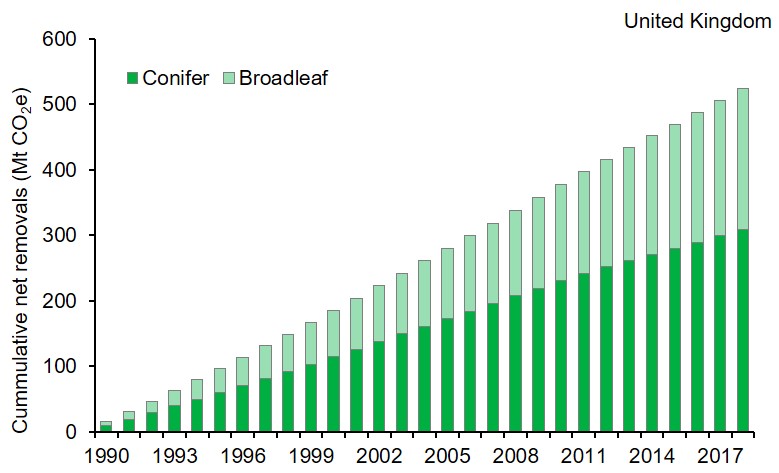 Assessment of change in cumulative net removal of greenhouse gases

Note: Long and short-term assessments are based on a 3% rule of thumb. The base years for these assessments use a 3-year average. See Assessing Indicators.

The data presented here are from the UK’s Land Use, Land Use Change and Forestry (LULUCF) greenhouse gas inventory, which provides estimates of the annual rate of emissions and removals of greenhouse gases (carbon dioxide (CO2), methane (CH4) and nitrous oxide (N2O)) from the atmosphere by forests in the UK between 1990 and 2018 (Figures D1bi and D1bii). LULUCF emissions and removals are given in terms of carbon dioxide equivalent (CO2e). The CO2e of a mixture of greenhouse gases is the quantity of CO2 that would have the same global warming potential.

The benefits that humans receive from the environment have become more widely recognised. The Millennium Ecosystem Assessment and the more recent UK National Ecosystem Assessment both highlighted that ecosystems and the services they deliver underpin our very existence. We depend on them to produce our food and timber, regulate water supplies and climate, and breakdown waste products. We also value them in less obvious ways: contact with nature gives pleasure, provides recreation and is known to have a positive impact on long-term health and happiness. Measuring the status of ecosystem services is therefore a critical aim of the indicator set. Greenhouse gas removal is a regulating service that contributes to reducing the scale and future impacts of climate change (climate change mitigation).

National Inventories of human-induced sources and sinks of greenhouse gases are submitted by Parties, including the UK, to the United Nations Framework Convention on Climate Change (UNFCCC) every year. This system was set up to meet the reporting obligations of the Convention and is used to report on progress in meeting Kyoto Protocol commitments. The Kyoto Protocol, which entered into force in 2005, obliges industrialised countries that have ratified the accord to reduce their emissions of 6 greenhouse gases, the major contributors being CO2, CH4 and N2O. The LULUCF greenhouse gas inventory covers emissions and removals of these 3 greenhouse gases resulting from direct human-induced land use, land-use change and forestry activities. The LULUCF estimates are compiled for the Department of Business, Energy & Industrial Strategy (BEIS) by the UK Centre for Ecology & Hydrology (UK CEH) and Forest Research (FR).

The forestry figures in the 1990 to 2018 LULUCF inventory have been revised and therefore the figures presented here are not directly comparable to those in previous publications. The explanation of the changes can be found on p354-357 of the latest National Inventory Report.

These revisions are due to improvements in the FR CARBINE model used for calculating changes in forest carbon stocks that include:

There have also been improvements to the process for allocating forest management activities. These improvements have led to changes in assumptions about the proportions of forest area allocated to new planting and felling (harvesting) over time.

The result of these (and earlier) model changes is a decrease in both the broadleaf and conifer forest sinks for all years between 1990 and 2018. More specifically, decreases to the conifer sink were of a greater magnitude than those to the broadleaf sink and decreases to both sinks are more pronounced in the later years of the time series.

Figure D1bii shows the annual breakdown of the cumulative removals shown in Figure D1bi. Although the indicator (for cumulative net removals) is assessed as improving in both the long term and short term since cumulative greenhouse gas removals have continued to increase, it should be noted that annual rates of removal have remained relatively static in recent years. It is also worth noting that the proportion of removals attributed to broadleaf woodland has been steadily increasing since the time series began in 1990. 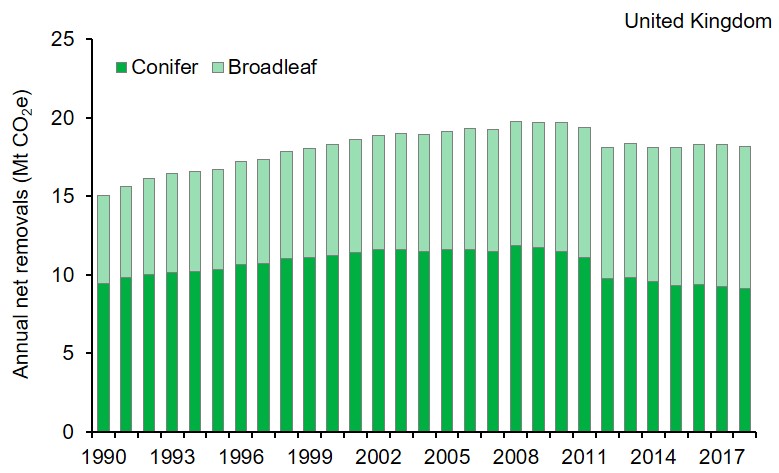 The estimated carbon stock of woodland trees in the UK can be used as a complementary measure of carbon storage. Information on current carbon stocks of forests in the UK were first gathered in 2014 using National Forest Inventory (NFI) data, based on a sample of woodlands equal to or greater than 0.5 hectares in size.

The total carbon stock of all species of tree within forests in the UK, at 31 March 2020, was estimated to be 250 Mt of carbon (916 Mt CO2e) (see Figure D1biii). Broadleaved trees, with an estimated carbon stock of 130 Mt (476 Mt CO2e), are responsible for a slightly greater proportion of the total UK carbon stock than conifer trees, which are estimated to have a total stock of 120 Mt (440 Mt CO2e). This difference reflects the fact that in the UK, the total ‘growing stock volume’ (as opposed to the total area) of broadleaved woodland covered by the NFI is slightly greater than that of conifer woodland.

Figure D1biii. Total carbon stocks in living conifer and broadleaved woodland trees in the UK, 1990 to 2020. 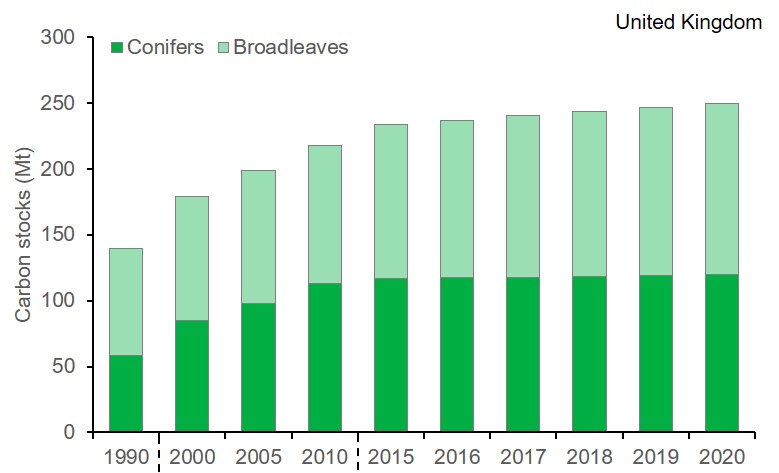 Fieldwork for the current NFI began in 2009 and is being conducted on a 5-year cycle. The assessment of woodland carbon stocks from this inventory has formed a new baseline for carbon accounting within British forests and woodlands. Estimates of carbon stocks are determined by the total growing stock volume of woodland; a function of:

Table D1bi. Total carbon stocks in coniferous and broadleaved woodland trees in the UK, by country, as at 31 March 2020 (Mt carbon)

Note: * Totals may not add due to rounding.

The current NFI fieldwork cycle began in 2015 and will run until 2020. The NFI assessment of woodland carbon stocks was used in the development of the reporting on LULUCF emissions and removals. However, as there are differences in both the scope and the data sources used for LULUCF (sequestration) and NFI (stock) figures, they are not directly comparable. More information can be found in the Forest Research Report (PDF, 1.29Mb).

Target 14: By 2020, ecosystems that provide essential services, including services related to water, and contribute to health, livelihoods and well-being, are restored and safeguarded, taking into account the needs of women, indigenous and local communities, and the poor and vulnerable.

Target 15: By 2020, ecosystem resilience and the contribution of biodiversity to carbon stocks has been enhanced, through conservation and restoration, including restoration of at least 15% of degraded ecosystems, thereby contributing to climate change mitigation and adaptation and to combating desertification.

Target 7: By 2020, areas under agriculture, aquaculture and forestry are managed sustainably, ensuring conservation of biodiversity.