This indicator indicates changes in pollinator distribution (bees and hoverflies) in the UK. The indicator is based on 377 species (148 species of bee and 229 species of hoverfly), and measures change in the number of 1 km grid squares across the UK in which they were recorded in any given year: this is referred to as the ‘occupancy index’. Many insect species are involved in pollination but bees and hoverflies are known to be important and are presented here as an indicator of overall pollinator trend.

The headline indicator for ‘all pollinators’ and the index for hoverflies have not been updated since the 2020 publication. However, the indicator time-series for wild bees has been extended by one additional year (to 2019).

There was an overall decrease in the pollinator indicator from 1987 onwards. In 2017, the indicator had declined by 30% compared to its value in 1980. The long-term trend was assessed as declining (Figure D1ci).

Between 2012 and 2017, the indicator showed a decrease of 2%; as a result, the short-term trend was assessed as little change. 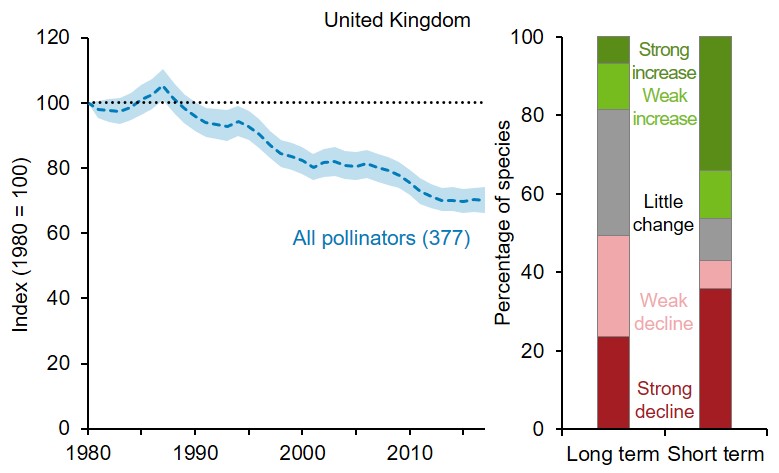 Assessment of change in the distribution of pollinators in the UK

Note: Analysis of the underlying trends is carried out by the data providers. See Assessing Indicators.

As individual pollinator species become more or less widespread, the communities in any given area become more or less diverse, and this may have implications for pollination as more diverse communities are, in broad terms, more effective in pollinating a wider range of crops and wild flowers. Despite the inter-annual variation, the overall trend for pollinators remains downward.

The indicator occupancy index was also produced for bee (Figure D1cii) and hoverfly (Figure D1ciii) species separately. The wild bee index fluctuates over the long term, in some years being close to its initial value, but in 2019 it was estimated to be 9% lower than in 1980. A larger proportion of bee species have decreased than increased over the long term (37% decreased and 24% increased). Over the short term, 40% decreased and 42% increased. 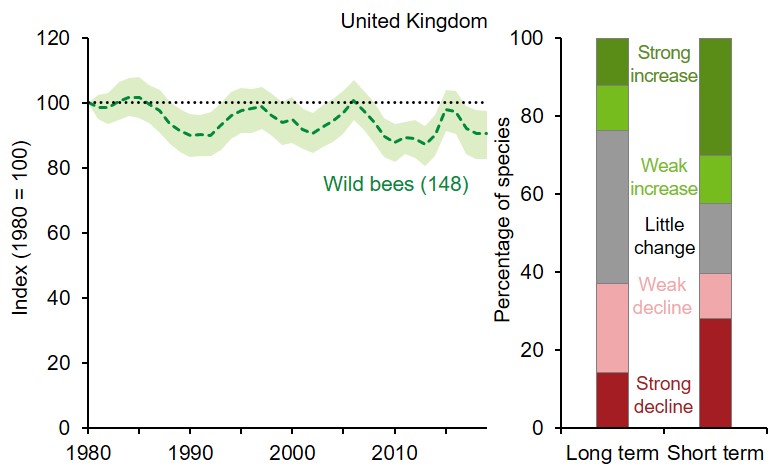 There was a decline in the bee index from 2007 to 2014. Loss of foraging habitat is understood to be a major driver of change in bee distribution (Vanbergen et al., 2014) and pesticide use has been shown to have an effect on bee behaviour and survival (Stanley et al., 2015). Weather effects, particularly wet periods in the spring and summer, are also likely to have had an impact. Further research would help to better understand the relative importance of these potential drivers of change.

A greater proportion of hoverflies have declined than increased in occupancy over both the long and short term (1980 to 2017: 55% decreased and 15% increased; 2012 to 2017: 49% decreased and 44% increased). It is not clear why hoverflies show a different trend to bees, although differences in the life cycle will mean they respond differently to weather events and habitat change. 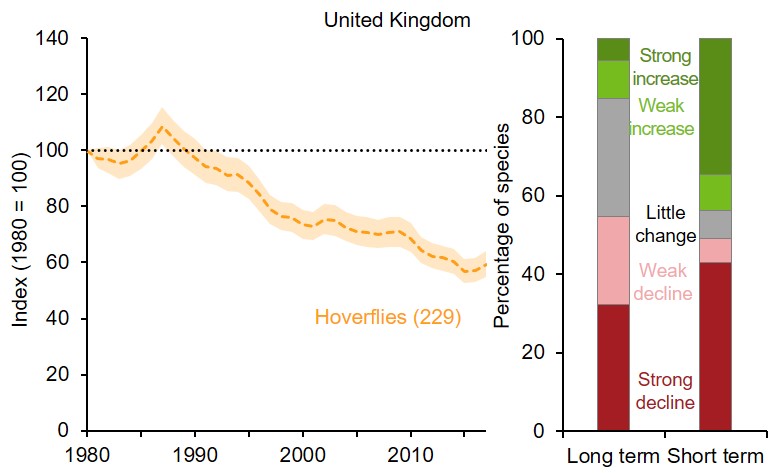 Nature is essential for human health and well-being. Pollination is an important ecosystem service that benefits agricultural and horticultural production, and is essential for sustaining wild flowers. Bees and hoverflies are also popular insects and people enjoy seeing them in towns, cities and the wider countryside. Insect pollination depends on the abundance, distribution and diversity of pollinators. Knowledge of the population dynamics and distribution of those species that provide the service, the pollinators, helps us assess the risk to these values. Many wild bees and other insect pollinators have become less widespread, particularly those species associated with semi-natural habitats. At the same time, a smaller number of pollinating insects have become more widespread. This may have implications for the pollination service they provide to crops and wild flowers, and is an area of active research (Potts et al., 2010; Garratt et al., 2014).

Occupancy of pollinators refers to the overall area where each species is found and does not refer directly to their abundance. The reduction in the index shows that overall pollinators are becoming more restricted in their distributions so that on average, in any one place the diversity of pollinator species found is reduced.

The indicator is the average trend across all 377 species included in the analysis. Individual species within the indicator will have different time-series trends (i.e. some may be increasing while others may show strong declines). The shaded region on Figures D1ci, D1cii and D1ciii is the 90% credible interval of the annual occupancy estimates and represents the statistical uncertainty surrounding the annual occupancy estimates. Credible intervals are similar to the confidence intervals used in parametric statistics, but are the appropriate metric to use with Bayesian statistics. Estimates will be revised as new data become available.

The Bayesian occupancy approach is an established analytical method that enables an estimation of species occurrence even though the data utilised in this indicator were collected without a standardised survey design (van Strien et al., 2013; Isaac et al., 2014). For each species, records were extracted at the 1 km grid cell scale with day precision, and an annual time-series of the proportion of sites occupied was calculated. Each species-specific time-series was scaled so the first value in 1980 was set to 100. The annual index (the pollinator occupancy indicator) was estimated as the arithmetic mean of the scaled species-specific occupancy estimates. Each species was given equal weighting within the indicator. Uncertainty in the species-specific annual occupancy estimates is represented by the 90% credible intervals. See the technical background document for further detail on the production of this indicator.

As species become more or less widespread, individual grid squares will have richer (more species) or poorer (fewer species) pollinator communities; pollination services are generally likely to be higher where the pollinator community is richer (Vanbergen et al., 2013). The area occupied does not necessarily relate to pollinator abundance, as a species with one individual in each of 10 grid squares would receive the same occupancy score as a species with 100 individuals in each of the same grid squares, although generally, species with greater occupancy are likely to be more abundant. National level data on changes in abundance of pollinators is not currently available.

The short-term trends tend to have fewer species falling into the ‘stable’ category than the long-term trends. This is likely to be a result of the high level of short-term variation in invertebrate populations. The species-specific trends were calculated as the mean percentage change in occupancy per year. Therefore, across a 38-year period, the influence of short-term variation on the trend is reduced compared to its influence on a shorter five-year period.

Target 14: By 2020, ecosystems that provide essential services, including services related to water, and contribute to health, livelihoods and well-being, are restored and safeguarded, taking into account the needs of women, indigenous and local communities, and the poor and vulnerable. 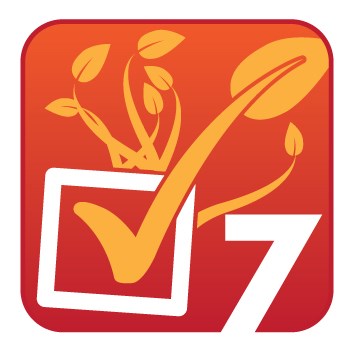 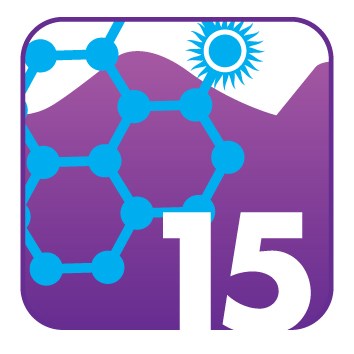