The first part of this indicator provides real-term, public sector spending on biodiversity in the UK alongside spending by non-governmental organisations (NGOs) with a focus on biodiversity and/or nature conservation. Spending is just one way of assessing the government’s commitment to biodiversity.

Spending on biodiversity in the UK by non-governmental organisations (NGOs) with a focus on biodiversity and/or nature conservation was £258 million (net of government funding) in 2018/19. This figure represents real-term increases of 5% since 2017/18, 28% over the last 5 years and 36% since the indicator was first compiled in 2010/11. 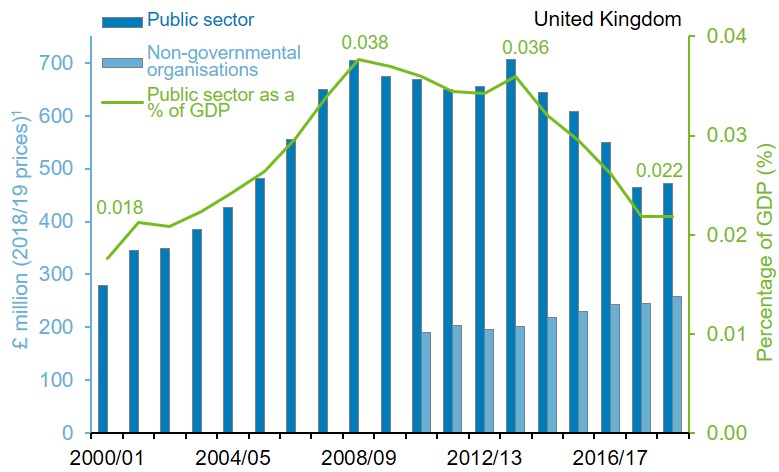 In 2018/19, UK public sector funding for international biodiversity totalled £154 million; a real-term increase of 72% since the time series began in 2001/02. Funding for international biodiversity has also increased by 52% over the last 5 years but decreased by 30% in the latest year for which data have been compiled (Figure E2ii). Annual changes in this measure are influenced greatly by the irregular nature of (i) contributions to the Global Environment Facility (GEF) and (ii) other Official Development Assistance (ODA) funding. The majority of the latest-year reduction is accounted for by a 50% real-term decrease in ODA funding for forestry related projects in 2018/19. 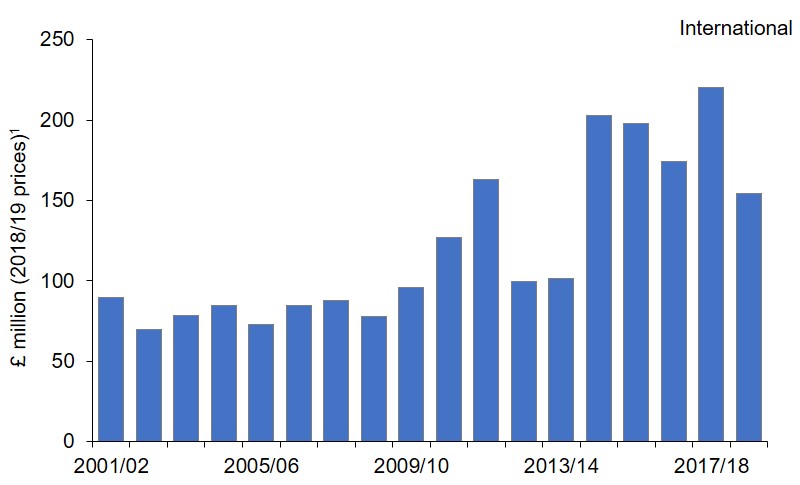 Assessment of change in public expenditure on biodiversity

Note: The long-term and short-term assessment of these measures is based on a 3% rule of thumb. The base years for these assessments use a 3-year average, see Assessing Indicators.

UK public sector funding for international biodiversity has increased from £89 million in 2001/02 to £154 million in 2018/19; a real-term increase of 72% (Figure E2ii). Funding for international biodiversity has also increased by £53 million (52%) in the last 5 years. The most prominent rise was during 2014/15 when the indicator more than doubled in value from £101 million to £203 million (2018/19 prices). This was due to a large increase in ODA funding to developing countries and multilateral organisations for forestry related projects.  Peaks in the measure observed in 2011/12 and 2017/18 and the trough observed in 2012/13 and 2013/14 were again due to large changes in this ODA funding stream. The irregular timing of large contributions to the GEF, a multilateral trust fund that supports a wide range of projects in developing countries also adds to the annual fluctuations in this indicator. These projects cover a diverse range of themes including: biodiversity, climate change, chemicals and waste, land, international waters and sustainable forest management.

Spending is just one way of assessing the priority that is given to biodiversity within government. Funding for conservation work is critical to delivery of country biodiversity and environment strategies. Adequate access to resources is essential for the effective implementation of the Convention on Biological Diversity in developing countries, along with other international biodiversity policy commitments, as part of more general development aid and poverty alleviation.

The changes in public sector expenditure in the UK should be considered in the context of the funding needed, in tandem with appropriate policy and legislative measures, to a level sufficient to meet UK and international biodiversity targets.

The public sector expenditure indicator is based on a combination of expert opinion together with published and unpublished data from organisations across the UK. The data are collated by Defra statisticians to provide estimates of spending on biodiversity in the UK between 2000/01 and 2018/19 and on biodiversity abroad between 2001/02 and 2018/19.

In 2019, the coverage of the international measure was extended to include a wider range of ODA projects. The additional data were only available from 2001/02 and therefore, the time series was shortened to ensure consistent presentation across all remaining years. At the time of the 2019 update, the inclusion of these ODA data resulted in additional annual expenditure of between £14 million and £146 million across the time series (in 2017/18 prices).

In 2014, Defra developed a measure of spend on UK biodiversity by NGOs with a focus on biodiversity and/or nature conservation. Although the measure does not include all the NGOs working in this field, it does compile data on biodiversity spending from 41 different organisations. These include 13 of the 47 Wildlife Trusts with the largest annual turnover, together with other well-known organisations such as RSPB, the Woodland Trust and WWF-UK. The data are used to provide estimates of spending on biodiversity in the UK between 2010/11 and 2018/19; wherever possible these figures are net of any government-funded spend. NGO support for, and action on biodiversity, some of which is funded by businesses and private individuals, is an important contribution to achieving biodiversity targets. Therefore, capturing the contribution of NGOs is a key element of tracking the UK’s conservation efforts and including this source of expenditure gives a more complete picture of biodiversity expenditure in the UK. It is not currently possible to disaggregate this measure to country level or to reliably report NGO spending on international biodiversity.

The public sector and NGO indicators include direct expenditure on nature reserves and conservation measures together with spending on relevant research and development; they generally exclude expenditure on administration and training. Where possible, indirect expenditure (e.g. transfers to other organisations) has also been excluded from the indicator in order to avoid any double counting of financial flows. Judgment has been employed to finalise some components of the totals and the figures should be taken as approximate.

Restructuring of government departments, changes to funding streams and/or projects and the outsourcing of work relating to biodiversity (e.g. research and development) mean that there may be some inconsistencies in the reporting of biodiversity expenditure from one year to the next. The limited coverage of the NGO indicator together with the complexities involved in both defining and identifying expenditure on biodiversity also mean that the public sector and NGO figures are likely to be an underestimation; they do however provide a clear trend of biodiversity expenditure since the beginning of 2000/01 and 2001/02 (UK public sector domestic and international spend) and 2010/11 (NGOs). It is hoped that further development work will lead to improvements in the overall accuracy of future publications.

A full list of public sector and non-governmental organisations included in this indicator together with further details of the methodology used to produce the totals are available in the technical background document.

The GDP deflator is a measure of general inflation in the domestic economy – it captures the price changes over a period of time. The deflator is expressed in terms of an index number. It is used here to convert historic prices into constant, 2018/19 prices, thereby allowing meaningful comparisons to be made between biodiversity expenditure in different years. It does however mean that data presented here are not directly comparable to those in previous publications because a new deflator is used to prepare each annual update.

Target 20: By 2020, at the latest, the mobilisation of financial resources for effectively implementing the Strategic Plan 2011-2020 from all sources and in accordance with the consolidated and agreed process in the Strategy for Resource Mobilisation should increase substantially from the current levels. This target will be subject to changes contingent to resources needs assessments to be developed and reported by Parties.

Target 3: By 2020, at the latest, incentives, including subsidies, harmful to biodiversity are eliminated, phased out or reformed in order to minimize or avoid negative impacts, and positive incentives for the conservation and sustainable use of biodiversity are developed and applied, consistent and in harmony with the Convention and other relevant international obligations, taking into account national socio-economic conditions.

Download the Datasheet and technical documentation from JNCC's Resource Hub.