a. Total extent of protected areas: on land

b. Total extent of protected areas: at sea

The percentage of features, or area, of Areas or Sites of Special Scientific Interest (A/SSSIs) in favourable or unfavourable-recovering condition increased from 67% in 2005, to 86% in 2014, and remained stable at 85% in 2019 (Figure C1ii). The proportion of features or area of land in unfavourable-recovering condition (the light blue part of Figure C1ii) has increased from 14% in 2005 to 35% in 2019. These changes reflect improved management of sites, but may also be affected by a greater number of sites/features having been assessed over time.

Figure C1i. Extent of UK nationally and internationally important protected areas: (a) on land and (b) at sea, 1950 to 2019. 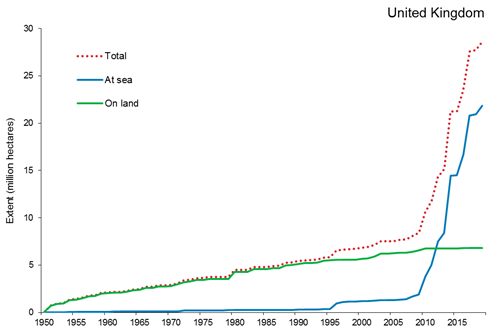 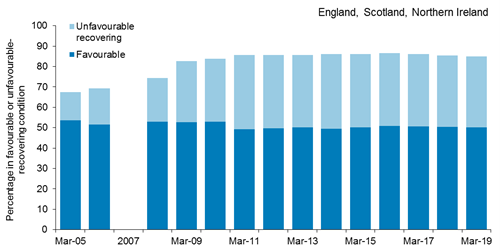 Note: Assessment of this indicator is based on comparison of latest data point with a 3-year average from the baseline, using the three earliest consecutive years available. See ‘Assessing Indicators’ for details.

Download the Fiche, Datasheet and Technical background document from the JNCC Resource Hub