No new data since the previous publication.

The assessments need to conclude whether each species of European importance found in the UK is in a: ‘Favourable’, ‘Unfavourable-Inadequate’, ‘Unfavourable-Bad’ or ‘Unknown’ conservation status. These categories are combined in the indicator as explained below. This indicator is based on an evaluation of whether the results of the most recent assessment (2019) are better or worse than those for the previous assessments (2007 and 2013).

This indicator was last updated in 2019 with new data from the 2019 UK Habitats Directive Article 17 report to the European Union. 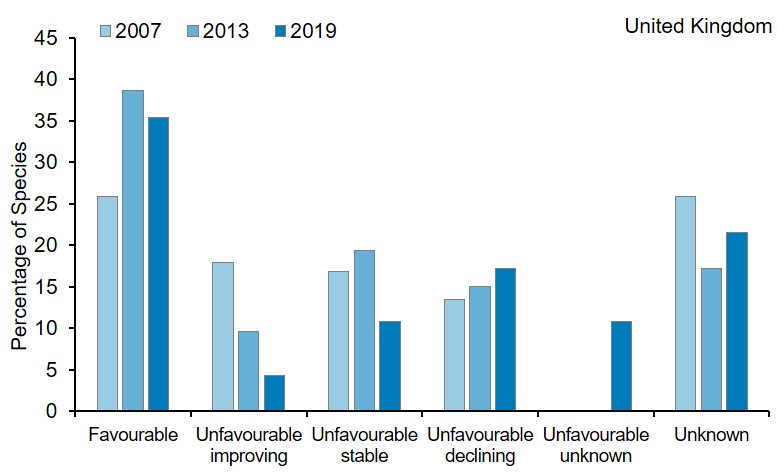 Assessment of change in status of UK species of European importance

Member States of the European Union are required to report every 6 years on the conservation status of habitats and species listed on the annexes of the Habitats Directive. Details of exactly what information is to be delivered is laid out in the report format and guidance notes. Each assessment needs to conclude whether the species is in one of the following states: favourable; unfavourable-inadequate, unfavourable-bad; or unknown

However, it is likely to take time before species move from unfavourable conservation status to favourable conservation status, so for the unfavourable assessments, an assessment of trend is made to determine if the species is improving, declining, or stable. The information sources on which the assessments are based vary between species – their quality is documented in the database which underpins the assessments. The changes are largely based on evidence, though expert opinion was used in a few cases where evidence was not available.

The indicator is based on an evaluation of whether the results obtained in 2019 are better or worse than those obtained in 2013 (short term) and 2007 (long term). At its simplest (Figure C3bi), this is the proportion of species which are favourable or show an improving trend (i.e. favourable, or unfavourable-inadequate but improving, or unfavourable-bad but improving). This applies to 44%(n1) of all species assessed in 2007, 48%(n1) of those assessed in 2013, and 40%(n1) of those assessed in 2019; the measure is therefore assessed as declining in both the long and short term.

Figure C3bi combines the unfavourable inadequate and unfavourable-bad assessments which show a similar direction of trend. In 2007, 2013 and 2019, improving and declining trends were assigned where the evidence allowed a conclusion that improvements or declines in the conservation status of species were occurring. Thus:

In 2007, no trend was assigned to those species which were neither improving nor declining. This included both species for which the trend was unknown, and those for which there was no evidence of change. In subsequent years, careful consideration of evidence allowed the use of the term ‘stable’. For ease of comparison in the figures, unfavourable-inadequate and unfavourable-bad assessments with no trend conclusion in 2007 were summed to form the category ‘unfavourable stable’; the same term was used for data in subsequent years, but with more confidence that the trend was neither improving nor declining.

Note that the Habitats Directive Annexes do not include birds, as they are covered by the provision of the (separate) Birds Directive, for which there is a different reporting process.

Article 17 of the European Union Habitats Directive requires Member States to report every 6 years on progress made with maintaining and/or restoring favourable conservation status for habitat types and species of community interest. These are habitats and species for which the UK has European-level conservation responsibilities.

The UK reported on 89 species in the Atlantic biogeographic region in 2007. In addition, 28 species classed as vagrants or occasional visitors (4 bats, 16 cetaceans, 4 turtles, and 4 seals) to the UK were not fully assessed. Instead a paragraph of information was provided on the occurrence of each of these vagrant species. In 2013 and 2019, the UK reported on 93 species, and collated information on a further 32 vagrants (6 bats, 1 fish, 17 cetaceans, 4 turtles and 4 seals).

The taxonomic breakdown of the 93 species reported for the UK in 2019 is:

Of these, 16 species are marine (2 marine algae [maerl], one turtle, 2 seals, 11 cetaceans), and the rest are terrestrial or freshwater. It should be noted that the list of species on the Habitats Directive Annexes was selected with a European emphasis, and therefore only represents a subset of those considered to be of importance for conservation effort within the UK.

Within the Habitats Directive, species can be listed on one or more of 3 annexes:

Statistics for conservation status assessments quoted in this indicator are for the 93 UK species listed on Annexes II, IV, or V, excluding the 32 vagrant species. 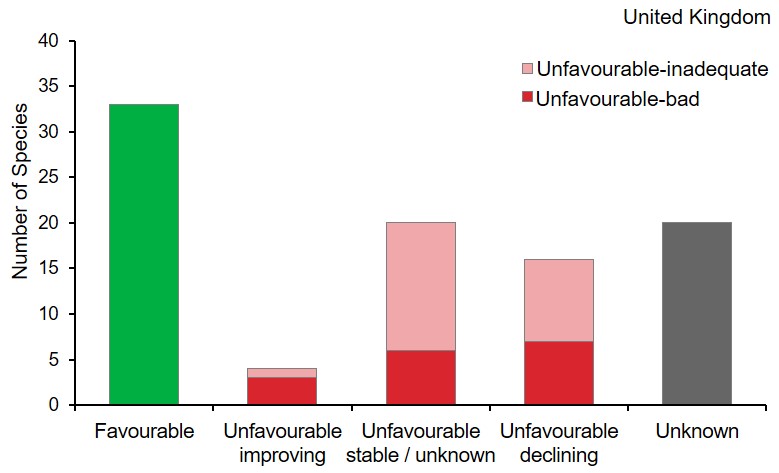 The Joint Nature Conservation Committee and the Country Nature Conservation Bodies have carefully collated and considered a wide range of data, using a robust quality assurance protocol, to come to the conclusion for each habitat and species, and to ensure changes, including within category changes, have been consistently and accurately discriminated. These changes are ecologically important, as stabilising a decline in a species, for example, is an important conservation achievement. The information sources on which the assessments are based are quite varied – their quality is documented in the database which underpins the assessments. The changes are largely based on evidence, though expert opinion was used in cases where evidence was not available.

Strategic Goal B. Reduce the direct pressures on biodiversity and promote sustainable use

(n1) Note that the combined figure for favourable and unfavourable-improving may be different from sum of the figures provided individually for these categories due to rounding to a whole number.

This indicator is based on the results of UK reporting undertaken under a European Directive, and was last updated prior to the end of the Transition Period following the UK’s exit from the European Union (31 December 2020).

C3a. Status of UK habitats of European importance
Back to top