C7. Plants of the wider countryside

b. Bog and wet heath

No update since the previous publication.

This indicator measures, in small plots, change in the abundance of plant species considered indicative of good habitat condition in the UK, using modelled abundance data from the National Plant Monitoring Scheme (NPMS). Plant populations form the environment in which most other species exist, as well as providing numerous ecosystem services. Drivers of change are well-understood for many UK habitats.

This indicator is presented for four UK broad habitat types: Arable field margins; Broadleaved woodlands and hedges; Bog and wet heath; and Lowland grassland. Within each habitat, plant species abundance trends indicative of good condition, are averaged to provide an indication of the habitat’s current state.

The COVID-19 pandemic in 2020 meant it was necessary to pause collection of the NPMS data for the health and safety of survey volunteers. This was in line with the government guidance and restrictions and lockdowns were implemented in all UK countries. When restrictions were lifted in 2020, some data were collected, but in insufficient quantity to update the indicator. 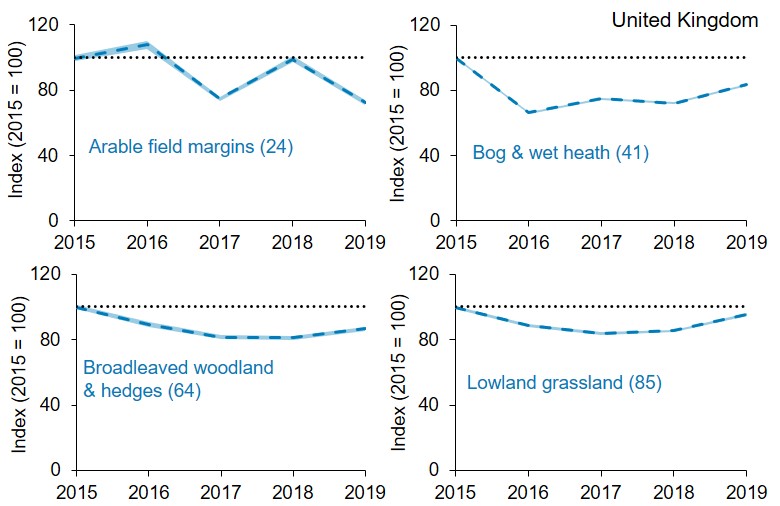 The National Plant Monitoring Scheme (NPMS) was designed to monitor UK habitats of conservation importance. This is achieved through the establishment of small plots in areas of habitats targeted by the scheme. The abundances of plant species, measured as the percentage area covered by a species within a plot, are recorded each year. Surveyors record from different lists of indicator species depending on their level of experience and the habitat within which a plot is located. Both the placement of plots, and the selection of 1 km national grid squares within which the plots are located, are subject to statistical methodologies designed to minimise bias (Pescott et al., 2019a).

The design of the NPMS included the definition of a set of 11 broad habitat types, within which 28 finer habitat types are nested. These fine-scale habitats are linked to existing classifications such as the British National Vegetation Classification. Surveyors can choose, based on their knowledge of a habitat, whether to record a plot at the broader or finer level.

The current indicator summarises species’ percentage cover (abundance) data at the broad habitat level. This is done using a model that is able to account for both the range of percentage covers that a species may exhibit in a habitat when present, and the fact that species may often be absent from any given plot (Pescott et al., 2019b). Such data are often described as “zero-inflated”. This model is applied across years for each species/habitat combination, and the indicators presented here for each broad habitat are the result of combining the resulting species/habitat time trends across the relevant set of NPMS habitat indicator species. The four broad habitat measures presented in this indicator (Arable field margins; Lowland grassland; Broadleaved woodlands and hedges; and Bog and wet heath) are those for which the largest numbers of NPMS plots currently exist. See the technical background document for more detail.

As this is an experimental statistic it has not been assessed.

Plants are a large part of the fundamental fabric of which habitats are made and directly indicate changes to environmental conditions and habitat management. Plants provide essential habitats and food for wildlife, and essential ecosystem services for humans, such as reduced erosion, nutrient cycling, oxygen production, and climate regulation. Furthermore, many plants, such as bluebells (Hyacinthoides non-scripta), horse chestnut (Aesculus hippocastanum) fruits (conkers), heather (Calluna vulgaris), oaks (Quercus spp.) and brambles (Rubus spp.) have deep cultural significance and are valued in their own right by the public.

The creation of the NPMS allowed for the creation of annual trends in the abundance of plants in habitats of conservation importance. Following five years of development, the scheme was launched by a partnership consisting of the Botanical Society of Britain and Ireland (BSBI), the Joint Nature Conservation Committee (JNCC), Plantlife, and the UK Centre for Ecology & Hydrology (UKCEH) in 2015. This indicator uses species selected by the NPMS as indicative of good condition in those habitat types considered to be of most importance for the conservation of UK biodiversity – see the technical background document for a full list of species included. These species are monitored in small sample plots (between 25 and 100 m2 in area) according to a methodology that was designed to minimise biases in data collection.

Since 2018, UKCEH, with input from all partners, have been developing a method of using NPMS data to indicate annual changes in habitat condition. The method is based on a hierarchical model, formulated in a Bayesian framework, that integrates information on a species’ abundance and occupancy; the occupancy estimates also take advantage of the fact that most plots are surveyed twice a year, allowing adjustments for false negatives (i.e. species that are overlooked during surveys). Simulation tests and applications to real data indicate that the method is robust and produces ecologically sensible metrics.

The 1 km squares of the NPMS were selected according to a weighted-random algorithm designed to introduce a known bias towards semi-natural habitats. However, within this design, a sampling bias exists in that, in common with other UK structured monitoring schemes based on volunteer participation, squares located within lowland areas are more likely to be sampled. Further work will focus on additional adjustment for bias (Pescott et al., 2019b).

Until 2013, this indicator was based on analysis of the change in plant species richness in the wider countryside. Data were taken from the UK Countryside Survey. This survey provides a random sample of vegetation plots located in arable and horticultural fields, agricultural grasslands, woodlands and associated boundary habitats in Great Britain. Key messages from the previous indicator are presented here; although now archived, the indicator can also be viewed in full.

The indicator presented the change in plant species richness in survey plots across Great Britain between 1990 and 2007 for a range of widely occurring habitats. The results from seven habitat types were grouped into three measures for the assessment: arable and horticultural land; woodland and grassland; and boundary habitats. The indicator compared species richness per plot for the exact same plots surveyed in 1990, 1998 and 2007. For each broad habitat type, the data were converted to an index (on a scale of 0 to 100) to compensate for the difference in plot size between habitats. In the long term (1990 to 2007) and short term (1998 to 2007), the change in plant diversity of arable and horticultural land was assessed as improving; whilst for woodland and grassland and boundary habitats the assessment in both the long and short term was declining (see Figure C7ii). 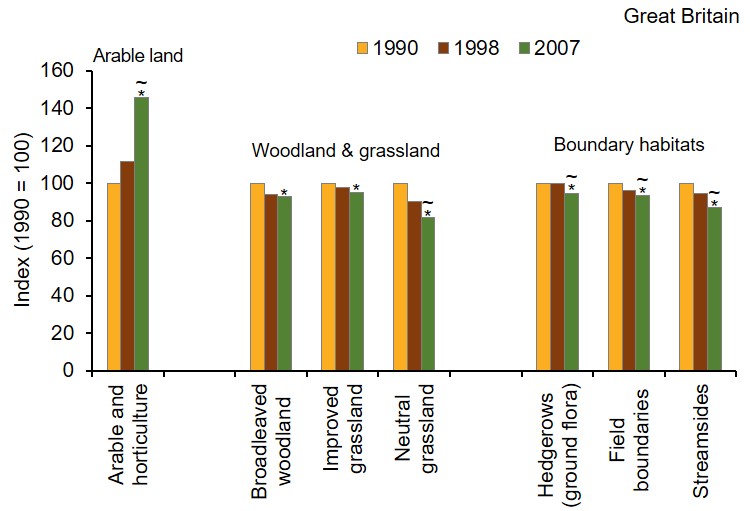